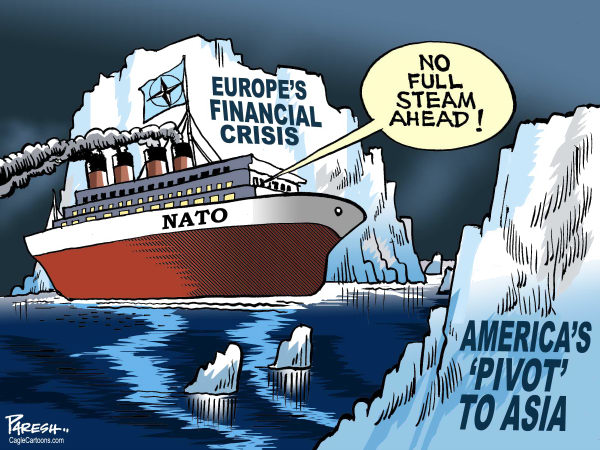 From Tomas Valasek, International Herald Tribune:  What is NATO to do? One school of thought in Europe holds that an alliance with such widely different capabilities will not survive. The Europeans must therefore build forces to complement America’s, which mostly means expanding their navies. Moreover, the argument goes, Asian security is in European interests, too — so the allies should be ready to fight in the Pacific regardless of whether the Americans expect their help or not.

But this is pure fantasy: European forces were built for conflicts closer to home. They are wholly unprepared to play a meaningful role in the Pacific, and are not going to acquire the necessary skills and hardware anytime soon — certainly not in the middle of the worst economic crisis in decades. The only two naval powers that come anywhere near being useful in Asia are France and Britain. And even France, in its present strategic review, is leaning toward keeping only a symbolic presence in the Pacific.

Rather than fake unity of mind and might — and inevitably disappoint everyone in the event of war in Asia — the allies should acknowledge their differences and build a new NATO strategy around them.

In Asia, Europe must demonstrate that it shares America’s security concerns and will do what it reasonably can. This means assisting partners in the region in strengthening their militaries, supporting U.S. diplomatic efforts, and applying E.U. expertise, where applicable, toward building a regional security architecture that includes China. If those efforts fail, the Europeans will not endeavor to fight in Asia (which few informed American observers expect them to do anyway).

In return, the Europeans will take a greater responsibility for “discretionary” missions in and around Europe: those conducted in the name of human rights (such as the one in Libya), or to rebuild war-torn societies (such as those in the Balkans). An expanded European military role on the Continent would free the United States to shift more of its troops and money to the Pacific.

Preparation for wars of self-defense, such as a possible conflict with Russia, would remain a responsibility of all allies alike, including the United States. Without it, NATO’s vow to defend its members is simply not credible.

This is the new bargain that the European allies should put to the U.S. president. Whether it be Barack Obama or Mitt Romney, the gaze of the U.S. military will remain on Asia. Europe may never become a real military actor in the region, but it can be useful to the United States in other ways. Given the right policies, NATO can remain strong even if America never thinks of itself as a European power again.