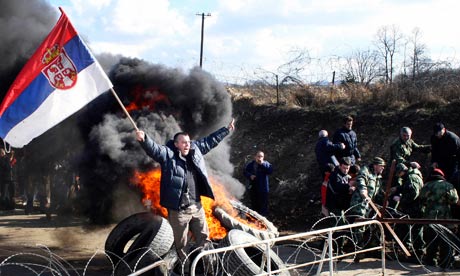 From Branko Milanovic, Globe and Mail:  Now that Croatia has become the 28th member of the European Union, there is plenty of talk that the European house is “full” and that no more members are desirable. It is undoubtedly tempting to keep the other Balkan countries on the sidelines of Europe.

But is it realistic to expect Europe to prosper as long as it has a soft underbelly where drug trade, human trafficking and money laundering are rampant – and where three powerful geopolitical forces (the West, Islam and Russia) meet?

The seeds of conflict in the Balkans will not be eradicated until the region, like Southern Europe in the 1980s and Eastern Europe in the 2000s, is safely anchored within the European Union.

At a time when “EU Europeans” have to contend with a lot of worries, Croatia’s accession last week – like Estonia’s recent adoption of the euro – provide a moment of positive sentiments. Those sentiments underline the enduring and remarkable attractiveness of the European Union and indeed its huge long-term success.

On a less positive note, we have to be mindful of one of the world’s most unpleasant anniversaries – that of the beginning of World War I. On June 28, 1914, with the assassination in Sarajevo, that world war was set into motion.

A century onward, the EU accession of Croatia on July 1, 2013 redraws the borderlines of Europe more or less to where they were in 1914. The anniversary thus reminds us of the inability of Europe to fully heal the wounds of a conflict that left it in ruins with millions of dead and led directly to the Bolshevik revolution and World War II.

What is called, in current Euro-speak, the Western Balkans is as divided today as it was in 1914. Most unsettling, the position of Bosnia is practically equivalent to what it was then – a sort of European, rather than Austro-Hungarian, protectorate ruled with limited local participation. . . .

The troublesome fact is that none of the six countries in the Western Balkans have solved their border issues, ethnic relations or corruption. While the violent conflict has receded and another outbreak is unlikely to be repeated soon, the problems have merely been postponed. . . .

The long-term future of Europe will only be secure when the remaining Balkan countries have become EU members. Only that will make their unresolved border issues and potential ethnic conflicts truly manageable.

Only as EU members can this collection of small and barely viable countries have a chance to grow faster economically and eventually catch up with the rest of Europe. The shift will help people living in these countries overcome centuries of narrow-mindedness, with sharp outbursts of conflict reaching even the global stage.

Branko Milanovic is a contributing editor of The Globalist, where a version of this article originally appeared, and Professor at the School of Public Policy, University of Maryland.  (photo: Sasa Djordjevic/AFP/Getty)