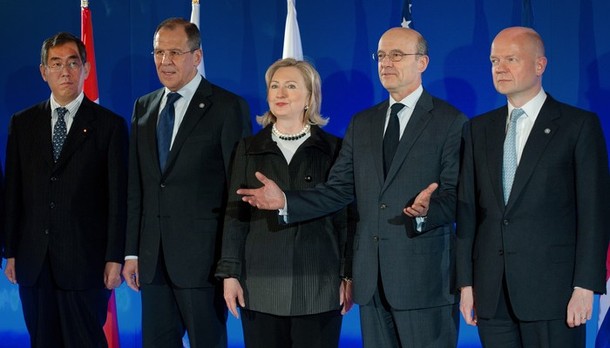 From Josh Rogin, the Cable:  Secretary of State Hillary Clinton’s meetings in Paris with the G8 foreign ministers on Monday left her European interlocutors with more questions than answers about the Obama administration’s stance on intervention in Libya.

Inside the foreign ministers’ meeting, a loud and contentious debate erupted about whether to move forward with stronger action to halt Col. Muammar al-Qaddafi’s campaign against the Libyan rebels and the violence being perpetrated against civilians. Britain and France argued for immediate action while Germany and Russia opposed such a move, according to two European diplomats who were briefed on the meeting.

Clinton stayed out of the fray, repeating the administration’s position that all options are on the table but not specifically endorsing any particular step. She also did not voice support for stronger action in the near term, such as a no-fly zone or military aid to the rebels, both diplomats said.

"The way the U.S. acted was to let the Germans and the Russians block everything, which announced for us an alignment with the Germans as far as we are concerned," one of the diplomats told The Cable.

Clinton’s unwillingness to commit the United States to a specific position led many in the room to wonder exactly where the administration stood on the situation in Libya.

"Frankly we are just completely puzzled," the diplomat said. "We are wondering if this is a priority for the United States."

On the same day, Clinton had a short meeting with French President Nicolas Sarkozy, in which Sarkozy pressed Clinton to come out more forcefully in favor of action in Libya. She declined Sarkozy’s request, according to a government source familiar with the meeting.

Sarkozy told Clinton that "we need action now" and she responded to him, "there are difficulties," the source said, explaining that Clinton was referring to China and Russia’s opposition to intervention at the United Nations. Sarkozy replied that the United States should at least try to overcome the difficulties by leading a strong push at the U.N., but Clinton simply repeated, "There are difficulties."  (photo: Getty)