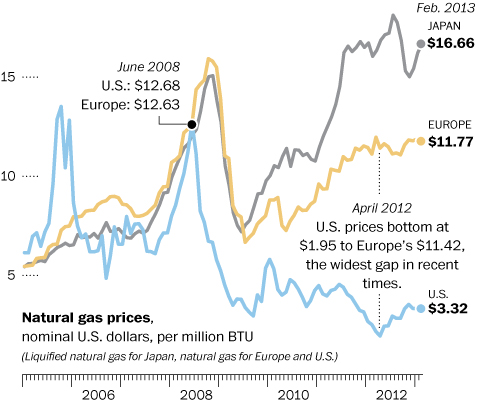 From Michael Birnbaum, Washington Post:  The sprawling chemical plant in this city along the Rhine River has been a jewel of Germany’s manufacturing-led economy for more than a century. But the plunging price of natural gas in the United States has European companies setting sail across the Atlantic to stay competitive.

German chemicals giant BASF, which operates the plant here, has announced plans for wide-ranging expansion in the United States, where natural gas prices have fallen to a quarter of those in Europe, largely because of American innovations in unlocking shale gas.

Among those most affected are energy-intensive industries such as steel and chemicals, because they use natural gas as a raw material and power source. With Europe lagging in energy production, manufacturers on the continent warn that a chain reaction could shift more and more investment to U.S. shores.

“It’s become clear, with the drop in gas and electricity prices in the United States, that we are, at the moment, at a significant disadvantage with our competitors,” said Gordon Moffat, director general of Eurofer, the main lobbying group for European steel manufacturers.

As new dollars pour into the United States, the outflow from Europe is costing jobs and weighing on decisions about ambitious and expensive green-friendly policies that critics say are contributing to the energy-price gap.

Here in Ludwigshafen, many people view the United States as the land of the future. Since 2009, BASF has channeled more than $5.7 billion into new investments in North America, including a formic acid plant under construction in Louisiana, where the company will manufacture a chemical used to de-ice runways, tan leather and preserve animal feed. . . .

The gap in natural gas prices has opened quickly, leaving companies that make investment decisions years in advance scrambling to catch up. As recently as 2007, U.S. natural gas prices were only about 20 percent lower than Europe’s, not enough to fundamentally reshape markets.

But with the boom in U.S. shale gas production, driven largely by fracking, U.S. prices last year dropped to a quarter of the European price. Most analysts expect that U.S. prices will stay low even if they rebound from their rock-bottom levels, providing a boon to all U.S.-based manufacturing through lower electricity prices.

Gas prices in Asia are even higher than in Europe, further channeling investment to the United States. The International Energy Agency forecasts that the United States will become the world’s largest gas producer by 2015, overtaking Russia, which supplies Europe with most of its natural gas. . . .

Europe has begun to use far more coal, which is cheaper but much dirtier than gas. There is new pressure to start tapping into Europe’s limited shale gas resources, despite environmental concerns.  (graphic: World Bank Commodity Markets/Washington Post)