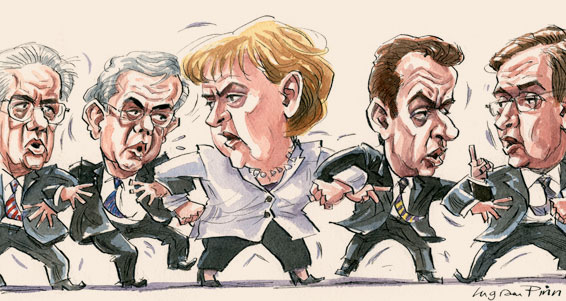 From Philip Stevens, the Financial Times:  Another week, another sticking plaster. The deal to prop up Greece has bought some more time. The important thing – or so we are led to believe – is that the wound has been cauterised. Again. Yet, it should be blindingly obvious to all that, in the great scheme of things, the latest bail-out is a sideshow.Two things are needed if Greece is to avoid catastrophic economic and social collapse. They apply whether it stays in or leaves the euro. The first is sufficient political resolve within Greece to reform radically the state and economy; the second is a reciprocal willingness among other Europeans to foot a sizeable bill for the failures and fraud of past Greek governments.

The pertinent question is whether such a bargain is available. The omens are not encouraging. Behind the name-calling that marks out Greece’s relationship with its eurozone partners lies a complete breakdown of trust. Many Europeans – and I am not talking only about Germans – do not believe that politicians in Athens will keep their promises; many Greeks think that the draconian austerity demanded as the price of debt relief is calculated to punish rather than rehabilitate. A fair observer would probably say that both sides have a point.

On one level, Greece can be seen as an exception. It is small and it is different. To a greater or lesser degree, the other nations on the eurozone’s periphery have taken the opportunity presented by EU membership to become modern European states. Ireland, for all its present troubles, has flowered as a self-confident nation free of a historic obsession with Britain. Spain has embraced modernity with enthusiasm. Greece’s politicians have never really bothered. Seen from Athens, the EU has been a source of cash rather than political inspiration.

Portugal has been slow to modernise. Its economy, like that of Greece, is in a pretty fine mess. But its politicians show a demonstrable resolve to catch up. So the reservoir of trust has not been drained. Policymakers in Brussels and Berlin will tell you they put Greece and Portugal in very different categories.

Drawing this line is not as easy as these politicians and officials would like. The reason that Greece has taken on such importance – it counts, after all, for only a few percentage points of eurozone output – is because policymakers have allowed it to make a wider statement about the future of the eurozone. Contagion is not a fact of economics but a product of politics.  (grpahic: Ingram Pinn/Financial Times)