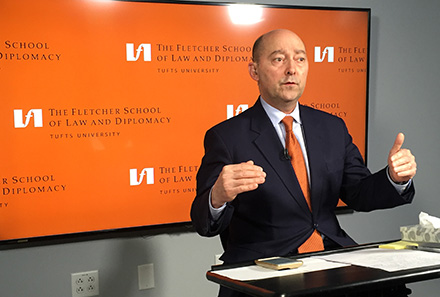 Growing doubt about President Donald Trump’s commitment to the U.S.-led NATO alliance and concerns that a looming summit with Russian President Vladimir Putin could weaken the security pact cloud an upcoming summit of world leaders in Brussels next week, former U.S. military commanders in Europe said….

“The alliance is at a moment of high tension … something is new and dangerous,” said retired U.S. Adm. Jim Stavridis, who served for four years as NATO’s supreme allied commander in Europe, in an interview with Stars and Stripes. “What is different now is the obvious antipathy, which feels deeply personal, on the part of the U.S. president toward the alliance in general and some of the key leaders in particular….”

Retired Lt. Gen. Ben Hodges, who commanded U.S. Army Europe until late 2017, said the issue of money is tearing at the alliance.

“Germany is our essential ally, our most important ally, but it seems like we are kicking them in the ass all the time,” Hodges said. “I don’t think it is the right approach. Certainly, they need to do more, but I think we need to be more sophisticated in how we incentivize burden sharing….”

Stavridis said the across-the-board defense spending increases in NATO in recent years were long overdue and should be viewed as progress. “But it will not go fast enough to satisfy Donald Trump, and the anger and petulance will probably increase,” he said.

Meanwhile, the “huge political disconnect between Trump’s dislike of NATO and its democratic leaders and his frequently expressed admiration for the authoritarian leader Putin is an enormous discontinuity for the alliance,” Stavridis said.

Allies “will correctly fear a terrible NATO summit followed by a very warm Trump-Putin meeting,” Stavridis added, regarding the July 16 summit in Helsinki. “They should be particularly concerned about a Trump giveaway — withdrawing troops from Europe, cutting defense funds to U.S. European Command, stopping ‘provocative’ exercises. If Trump follows the script he is executing with North Korea, their fears would appear very justified….”

In Europe, Trump’s rejection of the nuclear deal with Iran and wide-ranging trade tariffs on several allies that threatens a full-blown trade war with longtime allies, add to trans-Atlantic angst. Further confusion is being caused by the Pentagon review of the costs involved in pulling troops out of Germany after Trump expressed interest in the idea, according to a Washington Post report….