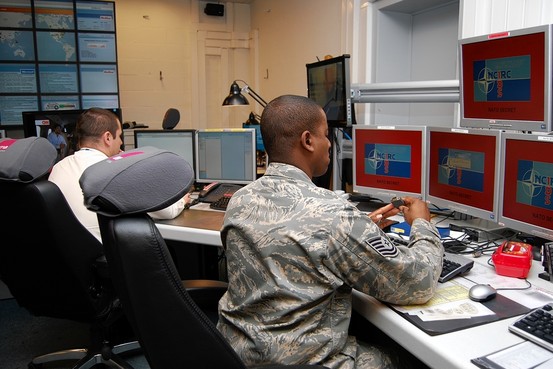 From Daniel Michaels, the Wall Street Journal:  NATO, fresh from its battlefield success in Libya, is focusing on the next front: cyberwar.

The North Atlantic Treaty Organization on Monday will collect bids from some of the world’s top defense companies, including Lockheed Martin Co. and Northrop Grumman Corp., to update and expand the alliance’s cybersecurity abilities.

The €32 million ($42 million) contract, although valued at less than the price of one fighter jet, holds great significance because it cements the alliance’s role in protecting cutting-edge infrastructure, say NATO officials.

"It’s a small amount of money but it’s technically ambitious," said Suleyman Anil, head of NATO’s Cyber Defense Section, in an interview. The systems being developed will need to collect and sift through vast amounts of data across NATO networks stretching from the U.S. to Afghanistan. The unit, NATO’s Computer Incident Response Capability center, must also be able to assist member governments facing major cyberattacks. . . .

The NATO contract is unusual because it lacks the domestic politics that sway most national-defense procurements. Northrop Grumman, for example, sees it potentially as a way to leverage its position as a U.S. leader in cybersecurity for greater traction in Europe, said Chris Durbin, head of the company’s European cyber operations in London. . . .

And only the U.S., Britain and a handful of NATO’s 26 other members or 40-odd partner countries currently have clear and active cyberdefense strategies, experts say. For the rest, NATO’s program offers a blueprint and even a shopping list, say industry officials. . . .

The project covers many fronts, including preventing cyberattacks and detecting any that do occur at more than 20 NATO locations. It entails software, support and hardware, such as advanced sensors that will be placed at points around NATO’s networks. Other elements include mobile cyberdefense kits for rapid reaction and centralized systems that will give NATO officials in Belgium information on problem situations that they can use to make decisions and react.  (photo: NATO)