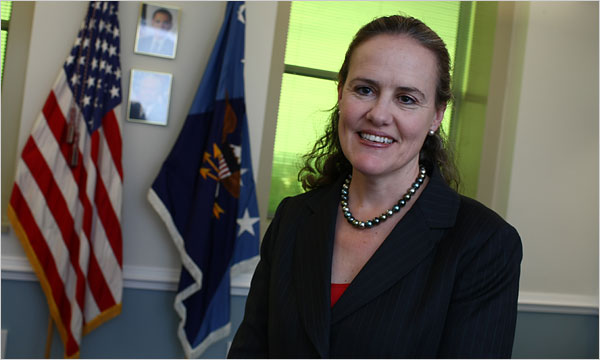 From Jim Garamone, American Forces Press Service:  I think we’ve turned around the strategy in Afghanistan,” she [Undersecretary of Defense for Policy Michelle Flournoy] continued. “I think there has been a lot of progress there. For the first time in five years, violence is down in Afghanistan.” For the first time in years, the United States has “a shot” at achieving its goals, she added.

The NATO operation to protect civilians in Libya from Libyan dictator Moammar Gadhafi is a good model for the future, Flournoy noted. The U.S. military played a limited role focused on the unique capabilities that the American military possesses, such as air-to-air refueling; intelligence, surveillance and reconnaissance assets; and command–and-control infrastructure.

The United States had important interests, but they were not vital in the country. Other nations had far more at stake. “I actually think this is an interesting model for the future, particularly as we have greater success in building partner and allied capacity and others are capable of stepping in to take a leadership role,” she said.

The actions over Libya and in Afghanistan prove that NATO is an active and vibrant alliance, Flournoy noted. “The question for NATO is as these economic pressures increase on our European allies, how are they going to manage their own defense enterprise? How are they going to keep investing in defense capabilities that enable them to keep contributing to the future?”

NATO needs to take stock of the assets within the alliance and find a smarter and cheaper way to provide capabilities. “How do we leverage each others’ strengths?” she asked. “How do we mitigate the shortfalls that we experience? We need to put our minds together to ensure the sum of the contributions is greater than the ‘eaches.’”

From Viola Gienger, Bloomberg News:  Undersecretary of Defense Michele Flournoy, who is stepping down from the No. 3 Pentagon post this week, urged that allies fighting in Afghanistan coordinate their withdrawal of troops and commit the money needed to fill the gaps they leave behind.

Flournoy stressed the need for an orderly transition days before French President Nicolas Sarkozy last week accelerated the pace of his country’s withdrawal.

The North Atlantic Treaty Organization’s Chicago summit in May should lead to a detailed plan for troop levels leading to the anticipated handover of security control to the Afghans by the end of 2014, Flournoy told reporters at the Pentagon on Jan. 23 as she prepared to leave office this week.

“Some countries may be wanting to put their own plans on the table at that point,” Flournoy said. “What we’re emphasizing is the importance of us all coordinating.”

Sarkozy preempted such planning with his Jan. 27 announcement after a Paris meeting with Afghan President Hamid Karzai, saying France will withdraw its combat troops by the end of 2013, a year ahead of schedule. The French president shortened the timetable after Afghan soldiers killed five French troops in two incidents in the past month. . . .

The timing and scale of the U.S. exit haven’t been decided beyond the reduction of 33,000 American troops by September, Flournoy said.

Taliban militants may be split over whether to wait for the U.S. and its foreign partners to leave or to proceed with negotiations to end the conflict, Flournoy said.  (photo: Richard Perry/New York Times)