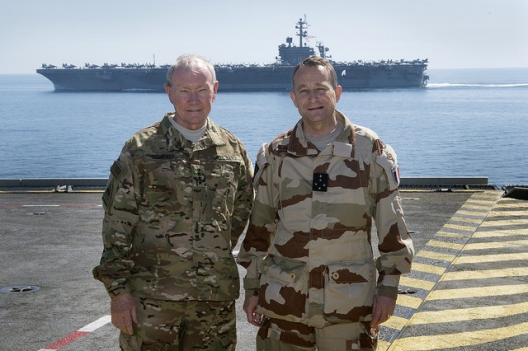 When Gen. Martin Dempsey’s plane touched down Sunday on the deck of this ship, he became the first chairman of the Joint Chiefs of Staff in recent history — perhaps ever — to set foot on a French aircraft carrier, a sign of the two nations’ increasing operational unity in the campaign against the Islamic State.

Since the ship arrived in the Persian Gulf last month, U.S. warplanes have landed on the Charles de Gaulle; French and American jets have carried out joint training missions; and the French ship has operated alongside the USS Carl Vinson, another carrier in the same waters. Both ships are now under American command.

The mission marks the first time that France has placed the Charles de Gaulle, the only non-U.S. nuclear aircraft carrier in the world and a jewel of the French military, under the operational command of a foreign nation, a reflection of the importance Paris has placed on combating the ­Islamic State militant group.

The United States continues to shoulder the bulk of the military burden among members of the coalition assembled against the group, which surged out of Syria last year to capture a third of Iraq. Of the 2,738 ­airstrikes the coalition has conducted in Iraq and Syria since last summer, the Americans have carried out 2,203….

Dempsey visited the Charles de Gaulle along with his French counterpart, Gen. Pierre de ­Villiers, who said the coalition had to balance the desire for quick results with the reality that Iraqi forces need time to prepare for ground offensives. “The Iraqis are the ones who will do this,” he said.

Nevertheless, differences remain in Paris’s and Washington’s approach to the Islamic State, notably France’s decision to forgo airstrikes in Syria. The French government has suggested that such strikes could benefit Syrian President Bashar ­al-Assad, whom Western leaders want to see replaced.

France is flying about 12 to 15 sorties a day from the Charles de Gaulle as part of the campaign against the Islamic State. French planes have dropped munitions in only some of those flights. The remainder are surveillance or air support missions that do not result in strikes. French planes are also flying from Jordan and the United Arab Emirates.