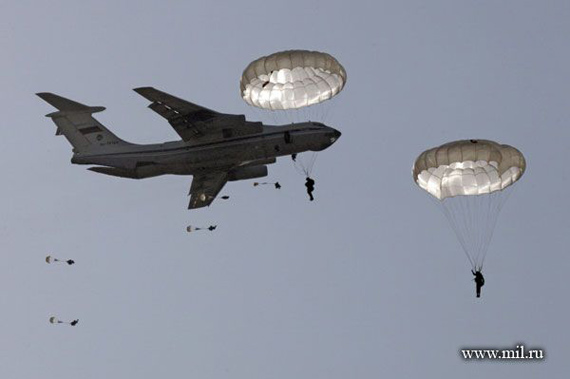 From Eloise Lee, Business Insider:  Russian paratroopers will meet up with American forces next month for an unprecedented military exercise in Colorado, according to RT News. . . .

The official purpose of the joint training is to practice airborne tactics and anti-terror operations, such as dropping into a hostile area and conducting a "terrorist camp raid."

"Soldiers of the two countries will hold a tactical airborne operation, including reconnaissance of an imaginary terrorists’ camp and a raid," said [Russian Defense Ministry spokesperson Col. Aleksandr] Kucherenko.

It’s worth noting the Russians will have access to U.S. military weapons training at the Army’s Fort Carson — "Home of America’s Best" — ahead of the scheduled May 24-31 drills. They’ll also be trained to understand and operate hardware used by U.S. forces in airborne missions including "parachuting, operation planning, reconnaissance, assault operations and evacuations by helicopter."

From Russia Today:  “This is the first time such an event is being held,” Russian Defense Ministry spokesman Col. Aleksandr Kucherenko stressed, announcing the plan. “The Russian airborne will contribute a special task group that will exercise with US special service weapons.”

The drills were arranged by the Russian Airborne Command and a US military delegation in Moscow last December. . . .

The drills will take place between May 24 and 31. But it’s not all work: on May 27, the Russian paratroopers will get a chance to unwind at a baseball game in Colorado Springs.  (photo: mil.ru)  (via @Defenseidentity)