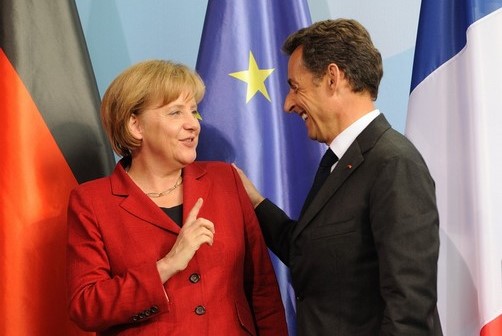 From Charlemagne, the Economist:  Insults are being lobbed back and forth across the Rhine. The French cannot stop themselves from provoking the Germans. Mr Sarkozy claimed that the €750 billion euro-zone rescue plan was “95% French”; Pierre Lellouche, his junior Europe minister, slipped in a reference to Auschwitz when talking about the bail-out. For her part, Ms Merkel vexed the French by unilaterally banning naked short-selling, then springing an austerity plan just as the French were urging more stimulus. The pair could not even agree on whose fault it was that their meeting in Berlin last month was cancelled just a few hours before Mr Sarkozy was due to leave Paris.

French officials seem unable to accept that such differences might be serious. Yet they are. The balance of power between the two countries has shifted. Germany and France are no longer shoulder-to-shoulder equals. This is particularly hard for France. Put simply, its Europe policy has long consisted of coming up with the ideas, and getting the eager-to-please Germans to pay for them. More Europe, in other words, has meant more France. But this equation may no longer hold.

The shift is partly economic. In 1999-2009 France’s share of EU exports shrank while Germany’s grew; last year the Dutch exported more than the French. The Germans have put up with meagre pay rises and tight budgets to keep their cutting-edge industry competitive and public finances in order, whereas the French have put off serious reform and built up huge public debt, while working shorter weeks and taking more holidays. Germany sees no reason why it should be told what to do by a country that has not made much effort itself.

Another factor is a political change in Germany. As Wolfgang Proissl argues in a forthcoming paper for Bruegel, a think-tank, the euro-zone crisis has exposed the cold reality that Germany is the power in Europe that counts the most. Top brass in Brussels, or Paris, can talk as much as they like. But until Ms Merkel agrees, nothing happens. Fully 20 years after reunification, Germany is asserting its interests as the union’s chief paymaster, and no longer feels the need to please. “You can’t call it the Franco-German couple any more”, laments a French former foreign minister, “because Germany has found its place as Europe’s number one.”  (photo: Getty)