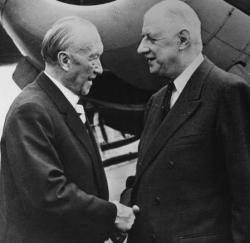 From John Kornblum, the New York Times: Ms. Merkel’s unwillingness to sweeten the financial pot echoed throughout Brussels. To many, it signified the decline of German willingness to “salute the French flag three times before raising the German flag,” as Konrad Adenauer used to put it.

Germans are not alone in objecting to throwing more money into the E.U. pot, but they happen to be the only ones who can do something about it. Many fear that without German complaisance, the E.U. will stutter to a stop. But such self-denial could never offer a viable foundation for a new Europe. Neither could the inefficiency and even corruption that characterizes many E.U. programs. …

The main conclusion I draw from the debate about Germany is that it is not about Germany at all. The task of building a democratic Europe is far from complete. Most of the foundations have been laid and now the residents are starting to haggle over the design. Weaving today’s 27 states into a true trans-Atlantic partnership is a task that is too big for Germany or even Europe to accomplish alone. They desperately need some skilled architectural assistance.

John Kornblum, senior counselor with the international law firm Noerr LLP in Berlin, served as the U.S. ambassador to Germany from 1997 to 2001.  (photo: German Information Center)