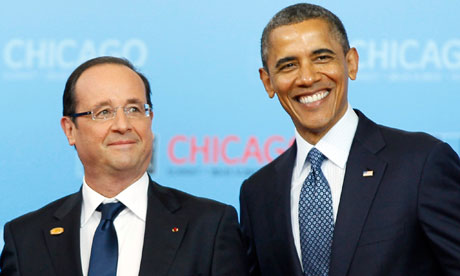 From Nicholas Dungan, Atlantic Council:  On the global stage, France under Hollande will revert to a more traditional Gaullist posture, with the goal of indépendance nationale. This denotes the lack of subordination to others, not an intention to strike out on one’s own, or snub allies. Hollande emphasized in his speech to the annual conference of French ambassadors in late August that France’s independence makes her valuable in the world. . . .

In his speech to the ambassadors, Hollande stressed his desire that strong relations with the United States should continue and his satisfaction that he and President Obama share views on major issues including economic growth. Hollande said France must accomplish its goals not alone but “with its European partners and also with its allies and especially the United States.” So Gaullism includes Atlanticism.

Hollande himself refused to accept an exemption from military service for poor eyesight and is imbued with respect for France’s armed forces. France’s withdrawal from Afghanistan—a Gaullist gesture of independence—is being conducted “in harmony” (the felicitous French phrase is “en bonne intelligence”) with NATO allies and represents only a one-year acceleration of Sarkozy’s previous timetable. By year-end, 2,000 French troops will have been repatriated, with others remaining behind to train the army and police and assist in education and the promotion of women’s emancipation.

Hollande has commissioned a review of the value of France’s reintegration into the combined military command of NATO by the former socialist foreign minister Hubert Védrine who has been an outspoken critic of that reintegration. While he might not propose a major change, Védrine will probably blame Sarkozy for giving up French independence and getting little in return. Hollande has broached with the British the concept of extending UK-France military cooperation to other EU countries and he confirmed this in his speech to the ambassadors—an old Gaullist goal of European defense outside NATO.

Hollande has commissioned a new French defense white paper for year-end led by the distinguished diplomat Jean-Marie Guéhenno to replace the grand strategic plan produced in 2008: the world has changed in four years. French conventional forces will be “right-sized” and an attempt made to match resources and probable missions. These defense cuts will probably result in a reduction in French forces’ availability for longer deployments abroad. . . .

While France under Hollande may thus return to apparent Gaullist detachment, rather than what many perceived as Sarkozy’s deference, the tough-mindedness of France as a Western ally and its commitment to national and international security will not flag in principle, though its resources may be focused more narrowly in practice.   (photo: Carolyn Kaster/AP)