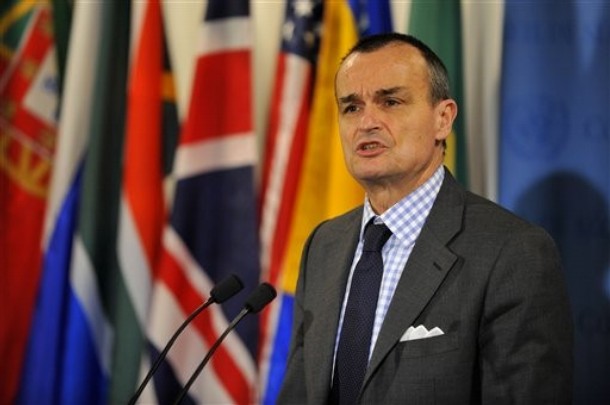 From Louis Charbonneau and Hamuda Hassan, Reuters:  France said it did not break a U.N. arms embargo by airlifting weapons to Libya’s rebels because the arms were needed to defend civilians under threat.

France on Wednesday became the first NATO country to openly acknowledge arming rebels seeking to topple Muammar Gaddafi, who has resisted a three-month-old bombing campaign that has strained alliance and rebel firepower. . . .

A French military spokesman confirmed delivery of arms, prompting some U.N. diplomats to argue that such transfers without the consent of the Security Council’s Libya sanctions committee could violate the embargo.

"We decided to provide self-defensive weapons to the civilian populations because we consider that these populations were under threat," French Ambassador to the United Nations Gerard Araud told reporters.

"In exceptional circumstances, we cannot implement paragraph 9 when it’s for protecting civilians," Araud said of a section of the U.N. Security Council resolution 1970 from February that imposed a comprehensive arms embargo on Libya.

Resolution 1973 subsequently authorized U.N. member states "to take all necessary measures" to protect civilians in Libya. It also adds "notwithstanding paragraph 9 of resolution 1970" on the embargo, opening up what some U.S. and European officials say is a loophole allowing them to arm rebels.  (photo: AP)