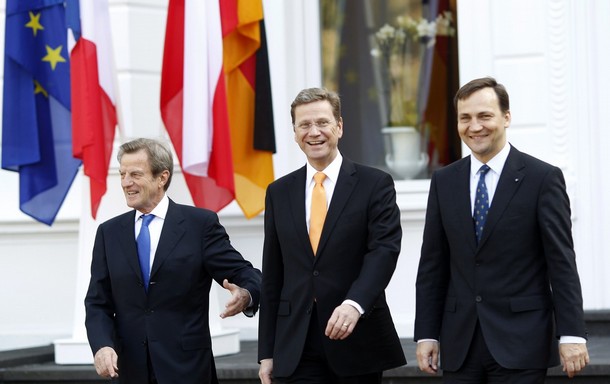 From Andrew Rettman, the EUobserver:  France, Germany and Poland have urged EU foreign relations chief Catherine Ashton to personally take charge of plans to boost military co-operation between EU countries and between EU and Nato structures.

The foreign ministers of the three countries in a rare joint letter to Ms Ashton dated 6 December and seen by this website said: "The European Union has become a recognised and sought-after security actor. It will become more solicited, alone or in co-ordination with other actors such as the UN, Nato, the United States and emerging powers."

"Your personal involvement in this endeavour is the key," the ministers add, calling for "bold decisions … with you, Madam High Representative, in the lead."

The letter proposes triggering the so-called Permanent Structured Co-operation clause in the Lisbon Treaty under which militarily-advanced EU states can create an avant-garde group on joint defence procurement and operational planning for other EU countries to get involved in down the line.

The ministers ask Ms Ashton to look into the creation of a permanent EU civilian-military planning capability; explore ways of making EU battlegroups pack more punch in the field; explore possibilities for "common funding" of battlegroup needs, such as air-lift equipment; and stimulate research investment in the European Defence Technological and Industrial Base. …

The defence plan is understood to have been hatched during a private conversation between Poland’s foreign minister, Radek Sikorski, and his former French counterpart, Bernard Kouchner, at Mr Sikorski’s private ranch in Chobielin, Poland, in 2009.  (photo: Reuters)