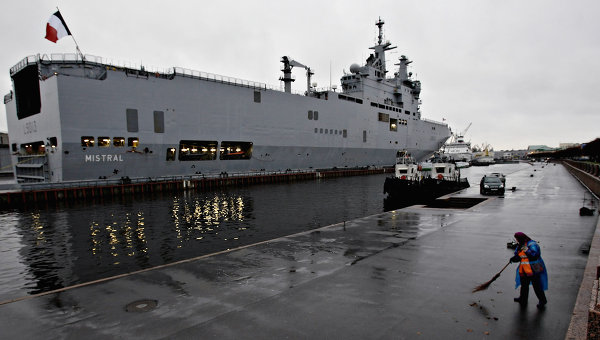 From RIA Novosti:  France will not use a $1.2 billion contract to build Mistral class amphibious assault ships for the Russian Navy to put pressure on Moscow over the Syrian issue, the country’s foreign minister said on Wednesday. . . .

Russia and China have blocked three UN resolutions on Syria.

In an interview with the France Inter radio station, Foreign Minister Laurent Fabius said his country “is putting pressure on Russia only in the diplomatic dimension.”

"We continue negotiations with Russians, we must find a solution [on Syria]. To achieve some progress, we discuss it in parallel with the Arab states, with our neighbors and the Russians,” he said.

He also said that French military equipment must not be sold to third states.

“If we learn about reselling, we will end all future supplies,” Fabius said.  (photo: Alexei Daniche/RIA Novosti)  (via @Kostian_V)