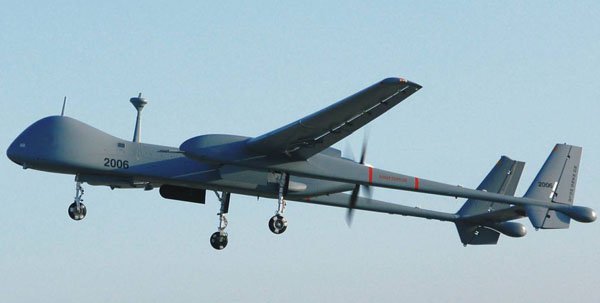 From Pierre Tran, Defense News:  France is offering the Heron TP as its contribution in kind to the NATO Alliance Ground Surveillance program, but technical and financial problems related to adapting the medium-altitude, long-endurance (MALE) UAV to French standards are holding up a deal with Dassault and Israel Aerospace Industries (IAI) , industrial and political sources said.

French Defense Minister Gerard Longuet told the French aerospace journalists’ press club that the deal would be sealed by “the end of 2012. . . .”

Dassault is negotiating with IAI on the contract for the Heron TP, which the French company would then deliver to French authorities.

“There are many difficulties” on adapting the Heron TP, driving the cost above the 320 million euro ($408 million) budget, a parliamentary source said. An extra 150 million euros each for Dassault and Thales has been estimated for the modifications, the source said.

That would push the cost to 620 million euros, approaching the 700 million euro price tag of a previous Dassault offer of the Système de Drone MALE. . . .

Among the key modifications are a satellite communications link and de-icing equipment, vital to plugging the UAV into the French — and NATO — network and fly in the northern European climate, the industry executive said. . . .

Paris has offered the Heron TP as its asset contribution, instead of paying cash, toward maintaining the AGS system, the executive said.

Although 13 nations are acquiring AGS, based on the Northrop Grumman Global Hawk UAV, all 28 alliance members help maintain the system in return for access to AGS information.

“The AGS package is still being discussed at NATO,” an alliance press officer said. “It is a topic to be discussed in the February meeting of defense ministers. . . .”

France has had a troubled relationship with AGS, as Paris looked to gain a big technological role. The planned AGS system relies on five Global Hawks to provide radar and optical pictures of conditions the ground, and a network of transportable ground stations. The UAVs will be based at Sigonella airbase, Italy.

The choice of the Heron TP sparked resistance in the French Senate, which argued for acquisition of General Atomics’ Reaper on grounds of cost, performance and interoperability with allied forces.

Longuet defended the choice of the Israeli UAV as “a compromise between capability and a long-term interest for industrial policy,” he told the press club.

“We could have found a cheaper, more efficient, quicker solution, but at the [unacceptable] price of long-term dependence,” he said.  (photo: UAS Vision)