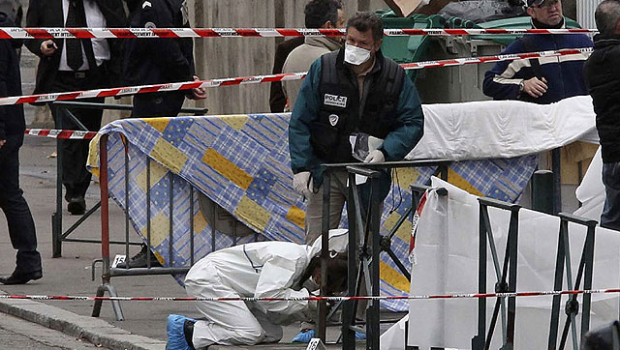 From CBS News:  French President Nicolas Sarkozy says authorities are raising the terrorism alert to its highest level across a swath of southern France where a gunman opened fire on a Jewish school before fleeing.

Sarkozy said Monday’s attack in Toulouse, which killed three children and a rabbi, was the worst-ever school shooting in France. He said the terror alert level is being raised to scarlet, the highest on a four-point scale, in the region that includes Toulouse and neighboring areas.

A U.S. official told CBS News by email on Monday that they would continue to monitor threats including those against the American Jewish Community, but to their knowledge there were no specific threats to locations within the U.S. at this point. They said are continuing to work with European authorities to monitor the situation there, and asking the general public to be vigilant and report any suspicious activity to local law enforcement authorities. . . .

One of the weapons used Monday, a .45 caliber handgun, was the same used to kill three paratroopers in two different attacks in the Toulouse region last week, according to investigators. Those two deadly attacks in the same region last week killed three French paratroopers and left another seriously injured. The attacker also used a .35-caliber gun, the police official said. . . .

Sarkozy said 14 riot police units "will secure the region as long as this criminal" hasn’t been caught.

A 30-year-old rabbi and his 3-year-old and 6-year-old sons were killed in Monday’s attack, just before classes started at the Ozar Hatorah school, a junior high and high school in a quiet residential neighborhood, Toulouse Prosecutor Michel Valet said. Witnesses said the man worked at the school.

Police identified the fourth victim as the 10-year-old daughter of the school director. A 17-year-old was critically injured. The gunman fired 15 shots during the attack. . . .

Sarkozy denounced "the savagery" of Monday’s attack on a school, and vowed to find the killer or killers.   (photo: Bruno Martin/AP)