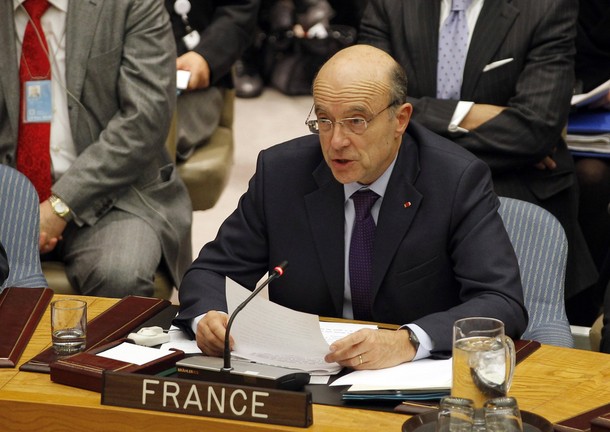 From John Irish, Reuters:  France said Wednesday it wanted the U.N. Security Council to set up humanitarian corridors in Syria to alleviate civilian suffering and that it was negotiating with Russia on a new U.N. resolution on the conflict.

Paris suggested in November creating a safe passage for relief organizations, with Syrian approval or an international mandate, to get food and medicine to civilians caught up in an 11-month-old struggle to topple President Bashar al-Assad.

"The idea of humanitarian corridors that I previously proposed, to allow NGOs to reach the zones where there are scandalous massacres, should be discussed at the Security Council," Foreign Minister Alain Juppe told France Info radio.

Lavrov was non-committal when asked whether Russia support such a plan. "It’s impossible to answer such questions without having language (details) in your hands," he told reporters. . . .

Under the French plan, humanitarian corridors would link Syrian population centers to the frontiers of Turkey, Lebanon or Jordan, to the Mediterranean coast or to an airport.

Juppe has said the zone could be protected by armed "observers," but has ruled out direct military intervention.

A diplomatic source said a U.N. resolution would be needed to create the corridors, but who would protect it, be it peacekeepers or unarmed observers, was still to be assessed. Financing of such an operation would depend on its form.

Juppe plans to discuss the plan with Lavrov in Vienna on Thursday.  (photo: Reuters)