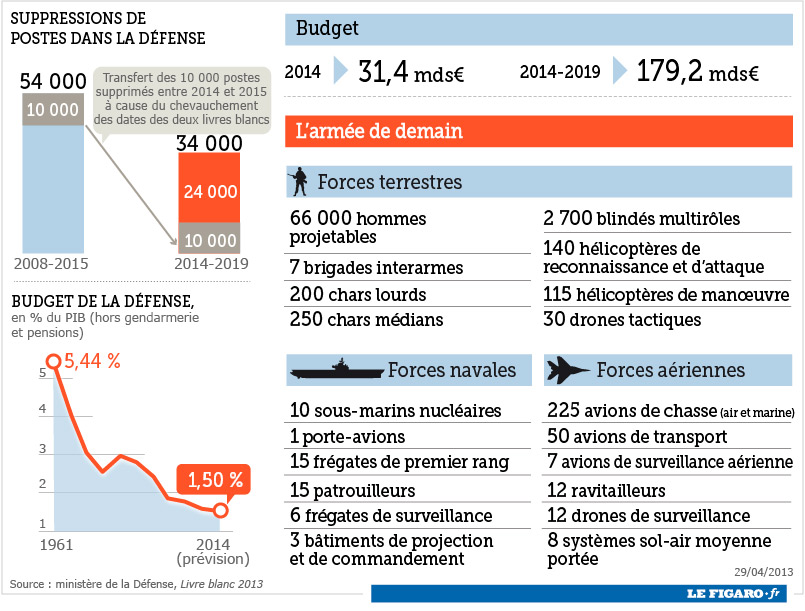 From Greg Keller, AP:  France said Monday it will cut another 24,000 military jobs by 2019 as it attempts to maintain a force ready to deal with global threats at the time when the bill for France’s decades of deficit spending is due. . . .

President Francois Hollande underscored the need for the review [defense ministry’s "White Book on Defense and National Security], saying that all the threats identified five years ago — nuclear proliferation, terrorism, cyberattacks — "far from diminishing, have increased."

The government insisted France will remain the second-largest defense force by spending in the European Union. And France is far from alone in making defense cuts.

Across the Channel, France’s historic rival, United Kingdom, is also in the midst of defense cuts which are expected to see the size of the army shrink from 102,000 troops to 82,000 by the end of the decade. . . .

Smaller, more reactive forces are one area of emphasis, with a capability to field up to 7,000 troops in three separate zones concurrently.

The white paper puts particular emphasis on France’s intelligence gathering and cyber defenses, and calls for corporations in militarily strategic industries to step up their own protection against cyberattacks.

From Mark Deen, Bloomberg:  “What is at stake? It’s maintaining the standing of our military while mastering our public finances,” Hollande said after receiving the so-called white paper on defense in Paris. “I’ve made the decisions with one thing in mind: the national interest. . . .”

The military needs “sufficient visibility for the coming decade,” industry needs predictable orders and the government needs to balance its accounts, “which is also an element of our sovereignty,” Hollande said.

Under the plan, France aims to retain the ability to intervene in two or three separate theaters of war at once with the help of allies.

Hollande intends to boost the nation’s intelligence capability with more satellite surveillance and the building of a fleet of long-range drones.

The country will retain four submarines as part of its nuclear deterrent, as well as six attack submarines and one aircraft carrier. It will have 225 combat aircraft, in addition to 50-odd transport planes and 12 re-fueling planes.  (graphics: Le Figaro)