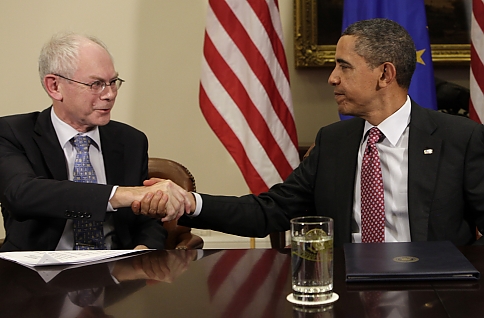 From Editorial Board of the Washington Post:  On Friday, the national leaders of the E.U.’s 27 member states expressed “support for a comprehensive trade agreement” with the United States, citing its potential to create jobs in a continent still struggling with high unemployment and debt. . . .

Apart from the economic benefits, free trade would strengthen U.S.-European strategic ties. For all their current woes, and despite the rise of China, the United States and Europe still produce more than half of the global economic output. It is in their mutual interest to unify standards and regulations so as to jointly shape the flow of trade.

For its part, the Obama administration has fretted that negotiations could bog down if Europe fails to back its pro-trade words with action, as it is sometimes wont to do. But Friday’s E.U. statement comes on top of unequivocal personal public support for free trade by Chancellor Angela Merkel of Germany and Prime Minister David Cameron of Britain — and now Europe is wondering when President Obama will send an equally strong signal, so that talks can commence in earnest.

Vice President Biden recently declared in Munich that the “almost boundless” benefits of free trade are “within our reach.” But many across the Atlantic expect Mr. Obama to put his own prestige on the line for free trade — perhaps by declaring it a major second-term goal in his State of the Union address on Tuesday. We hope so, too.  (photo: EU)