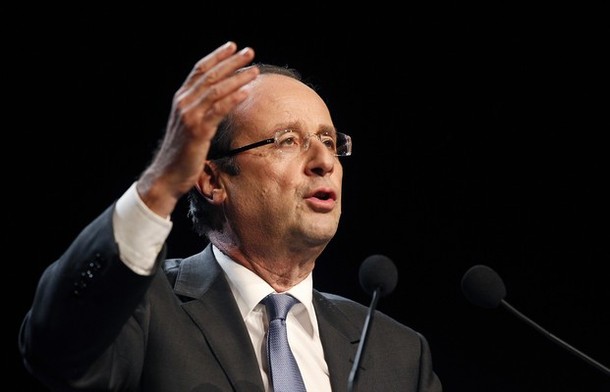 From John Irish, Reuters:  France’s Socialists have said they will pull troops out of Afghanistan this year if they win a presidential election, distancing themselves a little from the close relationship Nicolas Sarkozy has built with the United States.

With Hollande consistently leading Sarkozy in opinion polls, France may well have a Socialist head of state setting foreign policy for the first time since 1995.

But despite those two symbolic gestures, history suggests French policy would change more in style than substance if the left recaptures the Elysee palace on May 6.

Just days after the runoff, NATO allies and G8 leaders meet in Chicago in talks likely to reveal the tone of Paris’ new international discourse.

"I see our relationship as a result of friendly relations between allies and partners," Hollande said in a recent interview with English-language media.

"France will remain a reliable ally of the United States. Nevertheless, ally does not mean aligned. . . ."

Hollande’s pledge to bring troops home from Afghanistan by end 2012, a year earlier than planned by NATO, is popular at home. More than 80 percent of voters want an early withdrawal, even if defense ministry officials believe it unrealistic.

"Without doubt, what will be at the heart of foreign policy is the desire to be autonomous, meaning that France only decides in its national interests and defends them as it feels right," said Henri Nallet, a former Socialist Party foreign affairs spokesman and justice minister under Mitterand. . . .

Hollande has stood firm on a pledge to renegotiate the fiscal pact, demanded by Germany in return for its participation with euro zone bailouts, to include a greater push on stimulating growth.

Merkel cited that as one reason for openly backing Sarkozy despite their own sometimes tense relationship.

But most analysts think Hollande would ultimately have to tone down his demands for the good of the Franco-German relationship. His aides point to his europhile background.

"Hollande would be more respectful of European institutions, procedures and organizations," said a French diplomat who declined to be named because he serves the current government.

"He will be more attentive to the role of the European Commission and parliament. The European machinery will be respected, which Sarkozy has not done. . . ."

Alain Juppe, who took over the foreign ministry a year ago and has been credited with curbing the president’s impulsiveness and realigning foreign policy, says the difference between the two parties’ approach was minimal.

"There was a debate in the (Socialist-led) Senate last week which I took part in and after two-and-a-half hours I can’t tell you any more on what their policy would be because it’s pretty much the same on all subjects other than Afghanistan," he said.

The Afghan U-turn may raise doubts about the Socialists’ commitment to NATO since they opposed Sarkozy’s 2008 decision to rejoin the U.S.-led alliance’s integrated military command, from which President Charles de Gaulle withdrew France in 1966.

"We will keep our place (in the NATO command)," said Jean-Yves Le Drian, a friend of Hollande’s for 30 years and a possible future defense minister. "We wouldn’t have done it, but we aren’t going to unravel everything."  (photo: Getty)