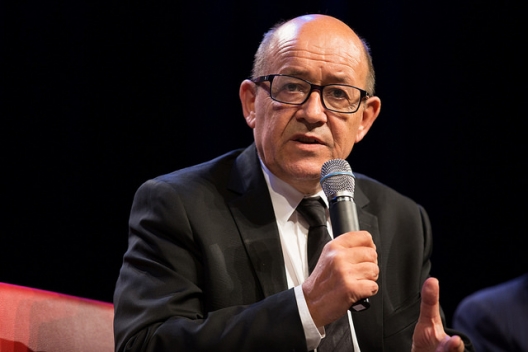 From Geert De Clercq, Reuters:  In an interview with French weekly Le Journal du Dimanche Defence Minister Jean-Yves Le Drian said there is a real risk of cyber attacks on French civil infrastructure such as water, electricity, telecommunications and transport, as well as against French democracy and the media.

Asked whether France was immune from such attacks, Le Drian said “No, of course not, we should not be naive….”

Le Drian said the number of cyber attacks against his ministry doubled every year and that in 2016 about 24,000 external attacks had been blocked by security, including attempts at disrupting France’s drone systems.

France should not only be able to defend itself against cyber attacks but should also be able to strike itself when necessary, Le Drian said.

He said the French army’s number of “digital soldiers” would be doubled to 2,600 by 2019, with support of an additional 600 cyber experts.

From France24:  Security services have warded off attacks aimed at “tarnishing the image of the ministry as well as strategic attacks – harassment, surveillance, espionage – and even attempts to disrupt our drone systems“, he said. “Thankfully, our defences were sufficient and none of these attacks were successful….”

“France reserves the right to respond by all means it deems appropriate,” he said. “That could be through the cyber arsenal at our disposal but also by conventional means. Everything would depend on the effects of the attack….”

“If there was an attempt to influence or manipulate the US presidential election, it would be a very serious incident. If it were led by a state government, it would be an intolerable interference.” Targeting a country’s electoral process is an attack on its democratic foundations and its sovereignty, he added.

“Of course our services have discussed the issue, if only to learn lessons for the future,” said Le Drian….

The head of Germany’s domestic intelligence agency, Hans-George Maassen, has warned that the government, businesses and infrastructure now live under “permanent threat” from Russian cyber intrusions. Some analysts say Russia aims to undermine EU unity by exacerbating divisions among the bloc’s members, including by leaking sensitive or embarrassing information….

Representatives from France’s main political parties met with digital security services in October to learn how to detect and prevent hacking attempts.

“It’s up to them now to apply rigorously what the experts call ‘digital hygiene’,” Le Drian said.