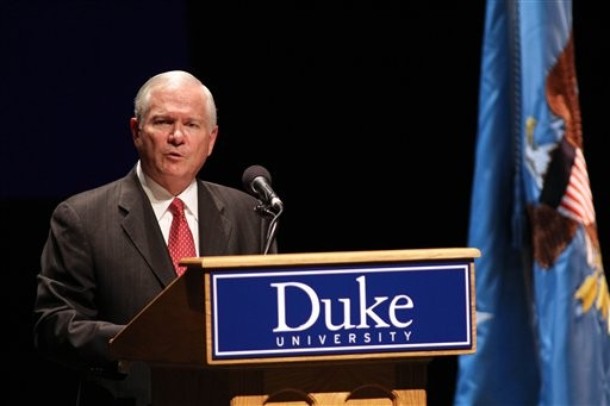 From Elisabeth Bumiller, the New York Times:  The United States is at risk of developing a cadre of military leaders who are cut off politically, culturally and geographically from the population they are sworn to protect, Defense Secretary Robert M. Gates told an audience at Duke University on Wednesday night.

In a speech aimed at addressing what he sees as a growing disconnect between the country as a whole and the relatively few who fight its wars, Mr. Gates said that although veterans from Iraq and Afghanistan were embraced when they came home, “for most Americans the wars remain an abstraction — a distant and unpleasant series of news items that do not affect them personally.”

Even after Sept. 11, 2001, Mr. Gates said, “in the absence of a draft, for a growing number of Americans, service in the military, no matter how laudable, has become something for other people to do.”

The defense secretary said that military recruits came increasingly from the South, the mountain West and small towns, and less often from the Northeast, West Coast and big cities. The military’s own basing decisions have reinforced the trend, he said, with a significant percentage of Army posts moved in recent years to just five states: Georgia, Kentucky, North Carolina, Texas and Washington.

The speech reflected the issues within the military about the merits and costs of an all-volunteer force fighting two wars for nearly a decade, the longest sustained combat in American history. The wars in Iraq and Afghanistan, Mr. Gates said, are the first protracted large-scale conflicts since the American Revolution fought entirely by volunteers, but with a force of 2.4 million of active and reserve members that is less than 1 percent — the smallest proportion ever — of the population it serves.  (photo: Jim R. Bounds/AP)