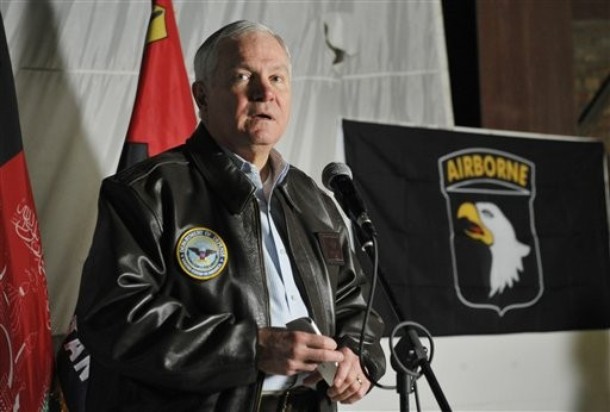 From Elisabeth Bumiller, the New York Times:  Secretary of Defense Robert M. Gates landed here on Monday for an unannounced trip to meet with President Hamid Karzai of Afghanistan and begin assessments to determine the number of American troops to be withdrawn from the country in July.

Mr. Gates met with General David H. Petraeus, the top American commander in Afghanistan, and was to have an evening news conference at the presidential palace with Mr. Karzai. Geoffrey Morrell, the Pentagon press secretary, said that what Mr. Gates learns on this trip, his 13th to Afghanistan as defense secretary, will inform his decision-making about the number of troop withdrawals in the coming months.

President Obama remains committed to a withdrawal of at least some American troops this July, as he promised in December 2009 when he authorized a surge of 30,000 troops to Afghanistan to try to regain control of deteriorating security across the country. …

From Afghanistan, Mr. Gates is to fly to Stuttgart, Germany, the headquarters of United States Africa Command, where he will preside over a ceremony marking General Carter Ham’s ascension as commander of the command, which has Libya in its area of responsibility.

From there Mr. Gates will go to a meeting of NATO defense ministers in Brussels, where the civil war in Libya and American troop withdrawals in Afghanistan will be discussed.  (photo: AP)