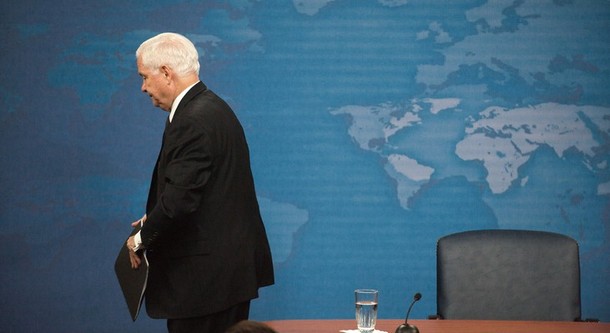 From Josh Rogin, the Cable:  In an exclusive interview published Monday, U.S. Defense Secretary Robert Gates told Foreign Policy that he plans to leave office some time in 2011, once President Obama’s Afghanistan’s strategy review is completed.

"I think that by next year I’ll be in a position where — you know, we’re going to know whether the strategy is working in Afghanistan," he told national-security writer Fred Kaplan. "We’ll have completed the surge. We’ll have done the assessment in December. And it seems like somewhere there in 2011 is a logical opportunity to hand off," he said.

Gates also said "it would be a mistake to wait until January 2012" to leave his post, because it might be difficult to get a good candidate to take the job, knowing that the administration might be voted out later that year.

"I just think this is not the kind of job you want to fill in the spring of a presidential election. So I think sometime in 2011 sounds pretty good."

The speculation over who might replace Gates is a popular parlor game in Washington. The rumored candidates include current officials, think tank leaders, and even some names left over from the last time the job was open.

Top candidates include Michèle Flournoy, the current under secretary of defense for policy, John Hamre, president of the Center for Strategic and International Studies, CIA Director Leon Panetta, and former Navy Secretary Richard Danzig. The oft-mooted move of Secretary of State Hillary Clinton over the Pentagon is less likely. (Gates’s people say trying to figure out the short list is premature.)

From Jen DiMascio and Gordon Lubold, Politico:  The Foreign Policy article is accurate, said Geoff Morrell, the Pentagon’s press secretary, but he said it doesn’t necessarily mean the secretary is leaving next year.

“This is not Bob Gates announcing his retirement,” Morrell told POLITICO. In fact, he said, every time Gates has planned his own retirement; he’s been called back into service.

“His record indicates that he’s a miserable failure at retirement,” Morrell said. …

At the Pentagon, several top leaders are leaving next year, including Adm. Mike Mullen, chairman of the Joint Chiefs of Staff. The vice chairman, Gen. James “Hoss” Cartwright, and the two top Army uniforms are leaving as well.   (photo: Getty)
United States and Canada