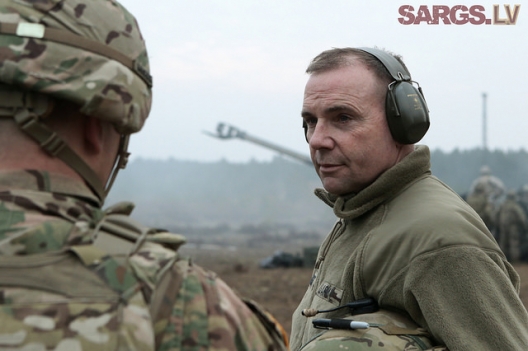 The fighting that has been going on in Ukraine is a very serious, kinetic, violent steel-on-steel fight. This is not some rebels sniping at each other. This is massive amounts of artillery, massive amounts of rockets, T-72 tanks, land mines, direct-fire weapons, thousands of troops involved. The proxies, the so-called separatists, clearly are being supported very actively by Russia. The border between eastern Ukraine and Russia is wide open, so every week there are convoys coming through that are unmonitored. Russians do not allow OSCE [Organization for Security and Cooperation in Europe] to monitor what is in those convoys, but the volume of artillery and rocket ammunition that has been expended is eye-watering. The quality of the electronic warfare [EW] capability that Russians have employed in eastern Ukraine, this is not something that you can create in the basement of your home. So when President Putin says, well these are just coal miners and tractor drivers, it is an obvious lie…..

We’ve got three battalions from the 173rd Airborne Brigade that will be matched up with three battalions of Ukrainians. It was to help them with their basic task — the national guard are responsible for radar security, route security, securing checkpoints, critical infrastructure, that sort of thing, behind the MoD troops that would actually be in the fighting.

So we’re planning to help them with doing those tasks, basic security tasks, movement tasks, field craft, that sort of thing. But the casualties that they have suffered have been so high, we realized there’s a need to help them with combat lifesaving.

The ultimate non-lethal aid is combat lifesaving first aid — helping them survive Russian rockets and artillery. One of the things they have gotten from us that has been very effective is the lightweight counter-mortar radar.

We have never been under Russian artillery like the volume that they are experiencing, so we’ve learned a lot from watching the Ukrainians take these lightweight counter-mortar radars. They’ve lost a couple, but they still have well over a dozen.