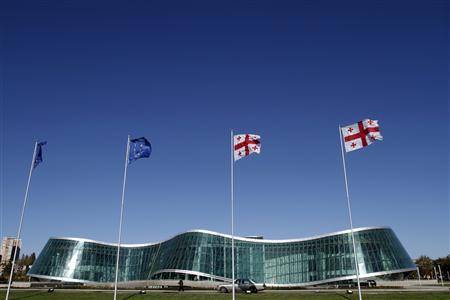 From the AP:  Georgia has arrested six people suspected of being agents for Russia, accusing them of causing a series of explosions, including one outside the US embassy, officials said.

[Deputy Interior Minister Eka] Zguladze said the six suspects are accused of staging an explosion outside the US embassy in Tbilisi in September and several other blasts, including one that killed a woman last month at the opposition Labour party’s Tbilisi offices. …

The Russian foreign ministry made no immediate comment. The Georgian authorities’ announcement last month of the arrests of 13 people suspected of spying for Russia drew an angry response from Moscow, which accused [Georgian President Mikheil] Saakashvili of suffering from "chronic spy-mania."

Zguladze said the suspects, all Georgian citizens, were arrested over the weekend and that explosives and weapons had been confiscated during searches of their homes.  (photo: David Mdzinarishvili/Reuters)