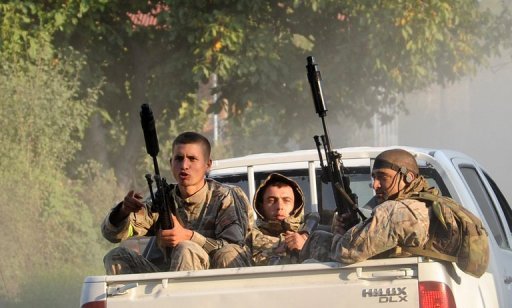 From Trend News Agency:  A meeting of the NATO-Georgia Commission on the situation in the Georgian-Russian border was held at NATO headquarters in Brussels.

Head of Georgian representation in NATO Nugzar Mgaloblishvili informed the commission about the situation in Dagestan section of the Georgian-Russian border, where law enforcement conducted an operation to neutralize militant group penetrated from Russia.

The sides expressed concern over the situation and called for a solution to all the problems on the basis of internationally accepted norms. NATO officials declared inadmissibility of intensity export of the North Caucasus to Georgia.

From Nino Ivanishvili, Reuters:  Georgian forces shot dead 11 gunmen, and three soldiers were killed in an operation to free hostages near the border with Russia, the Interior Ministry said on Wednesday.

It said five soldiers had also been wounded near the frontier with Russia’s Dagestan region, but did not give the nationality of the gunmen or say whether they had entered the country from Russia.

If the gunmen turn out to be from Russia, the incident could increase tension between Moscow and pro-Western Tbilisi, whose relations are still strained following a five-day war in August 2008 over two Russian-backed separatist regions in Georgia.

"Another attempt to export a new wave of tension and instability into Georgia from our northern neighbour will be stopped at the very beginning," Georgia’s President Mikheil Saakashvili said in a televised statement.  (graphic: AFP)