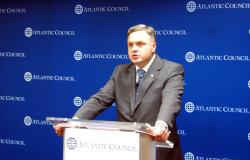 From the AP:  The former Soviet republic of Georgia wants the United States to outline the steps necessary for it to join NATO.

Deputy Prime Minister Georgia [sic] Baramidze was raising the issue in Washington this week with the Obama administration. He said in an interview with The Associated Press that Georgia wants a "road map" to membership.