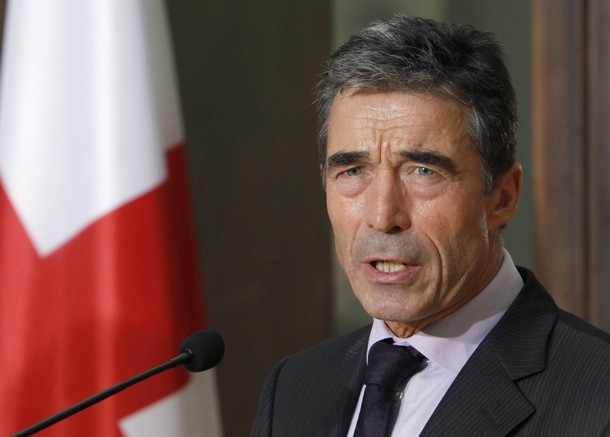 "We pay significant attention to the cooperation between NATO and Georgia and are going to discuss ways of deepening these relations. The decision made at the 2008 NATO summit in Bucharest remains in force – Georgia will become NATO member," Rasmussen told the Georgian parliament.

Rasmussen is in Georgia to meet with President Mikheil Saakashvili and discuss cooperation issues. He will also open a NATO office that Georgia says will serve as the alliance’s embassy in the ex-Soviet state.

From Samantha Shields, the Wall Street Journal:  "I would expect the NATO summit in Lisbon to reaffirm our position, which we took already in Bucharest in 2008, that Georgia will become a member of NATO once Georgia fulfills the necessary criteria," NATO Secretary General Anders Fogh Rasmussen said at a joint press conference with Mr. Saakashvili. Earlier, in a televised speech to soldiers at the Defence Ministry, he offered condolences and thanked Georgia for sending troops.

"Georgian soldiers are serving in Helmand province—one of the most difficult areas in our mission in Afghanistan. I highly appreciate your dedication to our common security, which is a testimony of strong partnership between Georgia and NATO," he said.  (photo: Reuters)