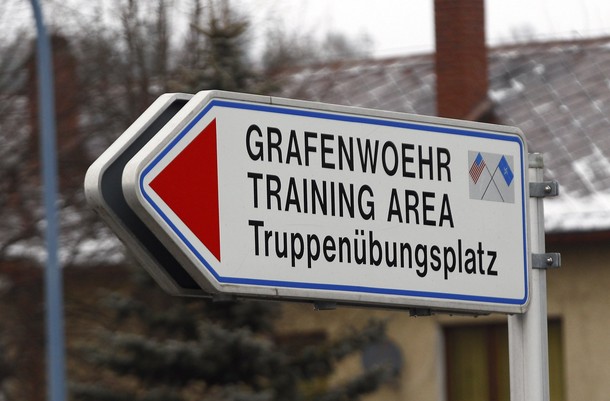 From Alexandra Hudson, Reuters:  Walter Brunner, a lively 82-year old whose blue baseball cap matches the color of his eyes, leans across a red leather booth at the American-style diner in this southern German town and tries to make light of the looming pullout of U.S. troops.

"We Germans fought for the Russians to go, now we are fighting for the Americans to stay," jokes Brunner, chairman of the German-American contact club in Grafenwoehr, whose lifeblood is its U.S. military base.

He watched a young Elvis Presley arrive here for training in 1958 and still goes tenpin bowling with his American friends every Monday night.

News that the 172nd infantry brigade, with its 3,500 soldiers and 8,000 family members, is being pulled from Grafenwoehr to return to the United States has hit this town hard.

After 67 years of living together, locals in Bavaria say the Americans are not just their employers and customers, but also close friends.

The Pentagon on Thursday announced sweeping defense cuts of $487 billion over the next decade, as it seeks to create a smaller, more agile force with a strategic focus on the Asia-Pacific region and Middle East. The demands of the Cold War, where Russians and Americans faced off across the walls, fences and barbed wire of the Iron Curtain, have receded into history.

Under the new strategy, two combat brigades, one in Grafenwoehr, the other in Baumholder near the French border, will leave Germany, reducing the size of the U.S. army in Europe by almost 10,000 from its present number of 41,000.

That would leave just two brigades remaining in Europe — one in Vilseck in Germany, close to Grafenwoehr, the other in Vicenza in Italy. The military plans to rotate U.S. based units into Grafenwoehr and Baumholder for training, keeping the sites. Grafenwoehr will also continue its key role training allied troops.

The economic impact however will be severe.

Local businesses say up to 90 percent of their trade comes from Americans. The town of Grafenwoehr receives 2.8 million euros in state subsidies every year largely due to the U.S. presence. Some 2,900 Germans are employed directly or indirectly by the military.

According to U.S. army data American purchasing power in and around Grafenwoehr, a quaint town of 7,000 not including the U.S. base, is around 35 million euros. Another 30 million euros is spent per year on rent by American families.

"Grafenwoehr lives from the Americans and will die without them. It’s as simple as that," said 35-year-old Helmut Dostler, whose family have run Grafenwoehr’s Hotel Zur Post for four generations.

"Losing troops would be fatal for the area. They are the biggest employer. Even if troops come here for training for a few months we will barely see them in the town. . . ."

There is wide political consensus in Germany in support of the troops staying, not least for their economic importance. Only the pacifist Left Party has challenged the 50 million euros a year Germany contributes towards the cost of U.S. bases, and called for all U.S. troops to leave.  (photo: Reuters)