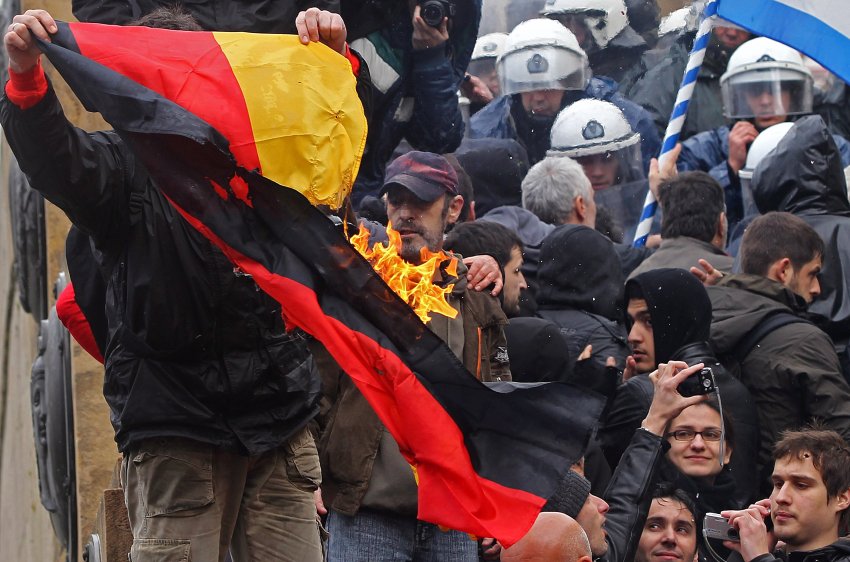 From Jan Fleischhauer, Spiegel:  It won’t be long before they start burning German flags. But wait, they’re already doing that. Previously we had only known that from Arab countries, where the youth would take every opportunity to run through the streets to rage against that great Satan, the USA. But that’s how things go when others consider a country to be too successful, too self-confident and too strong. We’ve now become the Americans of Europe. The role reversal won’t be an easy one either — it is already safe to say that today. We Germans are accustomed to having people admire us for our efficiency and industriousness — and not to hate us for it.

But before we complain too much about all this ingratitude, we should remind ourselves that we ourselves spent years passing the buck. As long as the global villain was America, the Germans joined in when it came to feeling good at the expense of others. The Americans also had every reason to expect a little more gratitude — after all, it was their soldiers who had to intervene when a dictator somewhere lived out his bloody fantasies while the international community stood by wringing its hands.

People came to secretly rely on the USA as a global cop in the same way that Germany’s neighbors are now expecting the Germans to save the euro. Unfortunately, however, the feeling of inferiority can be just as vicious as that of superiority.

Of course, one can try to make oneself seem smaller than one really is. But this self-denial doesn’t work. The Americans weren’t much more popular under Jimmy Carter than they were under Ronald Reagan despite the fact that the man from Georgia was kind-hearted and plagued by so many moral scruples that his preference probably would have been to just stop governing. Obama’s election also didn’t do a whole lot to help the US’ image in the longer term. A giant can’t conceal his size for long. . . .

We will probably just have to get used to the fact that, for a time, Germany won’t be very popular in some countries in Europe. In the worst case scenario, we could spend our next holiday in America for a change. Or we could just claim we are Swiss — as nobody seems to have any problems with them at the moment.