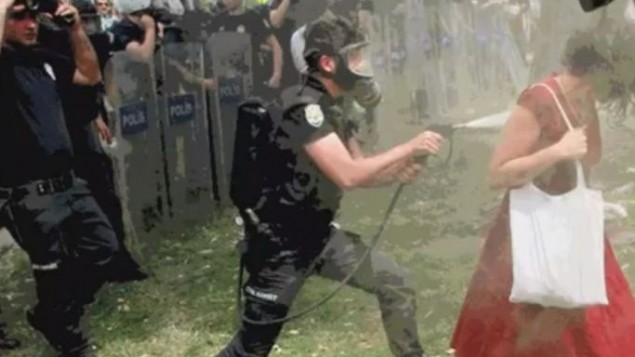 From Deutsche Welle:  Berlin has urged the Turkish government to refrain from heavy-handedness in its treatment of protesters. A senior EU official echoed the comments but said Brussels remained committed to Turkey’s accession to the bloc.

Chancellor Angela Merkel made her appeal for Ankara to reject the use of violence against demonstrators after a meeting with Tunisian Prime Minister Ali Larayedh on Friday.

The protests in Turkey began a week ago when police fired tear gas and used water cannon to disperse protesters opposed to the redevelopment of a park in Istanbul. The demonstrations turned into a general wave of unrest spread across the country. Protesters accuse Prime Minister Recep Tayyip Erdogan and his government of jeopardizing Turkey’s secular values by gradually imposing authoritarian Islamic rule. . . .

Brussels also raised the issue of excessive force against the Turkish demonstrators on Friday, claiming it "has no place" in a democracy.

"Peaceful demonstrations constitute a legitimate way for these groups to express their views in a democratic society. Excessive use of force by police against these demonstrations has no place in such a democracy," said European Union Enlargement Commissioner Stefan Fule.

At a conference in Istanbul that was attended by Erdogan, Fule said authorities responsible for heavy-handed policing should be held to account. However, Fule said that Brussels remained committed to Turkey’s accession to the EU.   (photo: Youtube screenshot)