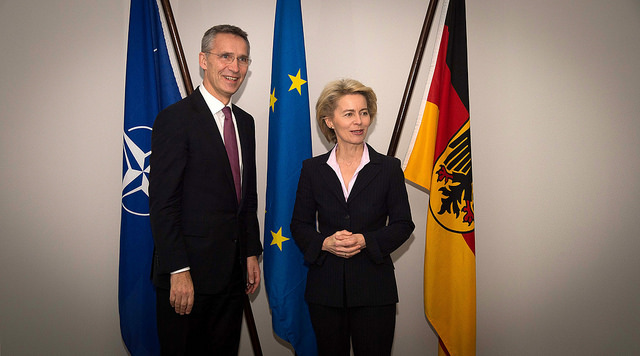 The alliance is not just about bases and troops. It is about defending the world order.

While NATO’s key purpose remains to guarantee the security of its members, it has never been a purely military alliance. It is a political alliance as well, based on the common aspirations of its members who, as the NATO Treaty says, “are determined to safeguard the freedom, common heritage and civilization of its peoples, founded on the principles of democracy, individual liberty and the rule of law.”

These principles are under assault today. Russian aggression in Eastern Europe, Chinese assertiveness in the South China Sea, the terrorism of the Islamic State spreading from the Middle East to the capitals of Europe, authoritarian regimes developing nuclear weapons — as different as these challenges are, they have one thread in common: They emanate from actors who oppose the international order. They try to undermine or even change the rules that have governed the age of democracy and prosperity since World War II.

The democracies of NATO need to stand together to overcome these challenges. Collectively, we are stronger than even the mightiest of us would be on her own. Accordingly, since 2014, when Russia invaded Ukraine, NATO has adapted to the situation at hand — as it has done many times in its history. Among 29 sovereign states with different political cultures and points of view, such adaptations will always be complicated, and sometimes even messy. But NATO’s ability to change its priorities and its strategies ensures that the alliance will stand the test of time….

In fulfilling its three core tasks — collective defense, crisis management and partnerships — NATO is an irreplaceable building block for an international order that favors freedom and peace….

Maybe the most basic benefit of NATO is that it provides reliability in an unreliable world. Our unshakable commitment to Article 5, the NATO treaty’s collective defense provision, ensures that our common security is truly indivisible. We will help our weakest ally just as we have helped our strongest by invoking Article 5 — for the first and only time in NATO’s history — after Sept. 11, 2001….

Ursula von der Leyen is the federal minister of defense of Germany.