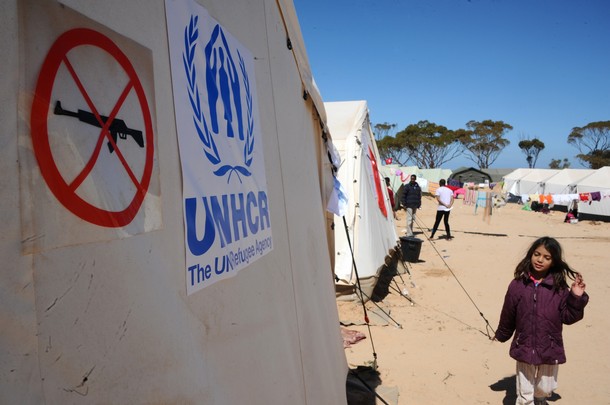 From Spiegel:  In a Thursday interview with the television channel N24, [German Foreign Minister Guido] Westerwelle said that Germany would take part in a European Union humanitarian mission should such an operation come to pass. Were the United Nations to make a request for assistance, "then of course we wouldn’t shirk our responsibility," Westerwelle said.

For the moment, of course, such a mission is purely hypothetical. While European Union foreign ministers agreed in March that it would make an EU battle group available should it become necessary to escort humanitarian operations, the UN Office for the Coordination of Humanitarian Affairs (OCHA) has so far made no such request. Germany currently contributes 990 troops to one of the two EU battle groups. Any participation of the groups would be limited to escorting humanitarian and medical supply shipments and providing security during the evacuation of refugees.

Germany participation, however, would have to be authorized by parliament. According to a report in the Süddeutsche Zeitung, Berlin is currently preparing a mandate which could be quickly authorized in the event it receives an OCHA request. ..

The opposition in Berlin has been critical of Westerwelle and Chancellor Angela Merkel when it comes to Berlin’s position on Libya. On Thursday, Omid Nouripour, the Green Party’s security expert in parliament, told SPIEGEL ONLINE that "providing support for humanitarian aid operations is self-evident. But that isn’t enough. As a country that has delivered weapons to (Libyan dictator Moammad) Gadhafi in recent years, we should now be participating in the maritime weapons blockade." Rainer Arnold, a defense policy expert for the Social Democrats in parliament, told the daily Mitteldeutsche Zeitung that "Germany would be wise to participate" in the Libya operation.  (photo: Getty)