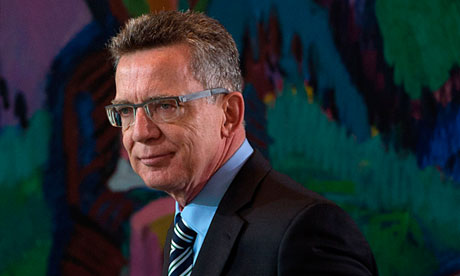 From Nick Hopkins, Guardian:  Britain’s standing as a leading military power with the ability to influence events beyond its own borders will be jeopardised if the country leaves the European Union, the German minister of defence has warned.

In an interview with the Guardian, Thomas de Maizière insisted the defence implications for Britain, Europe and Nato would be profound, and said this was an aspect of the argument David Cameron did not appear to have recognised. . . .

"We in Germany would lose a strong partner for a pro-Atlantic co-operation with America and a pragmatic British way to deal with security issues. . . ."

Germany and France have said the UK cannot cherrypick its membership, and De Maizière made it clear that Berlin needed strong UK support within the EU to counter French hopes of weakening Nato at the expense of Brussels.

"France has asked us to take more lead within the EU on defence. France is not in favour of a stronger role for Nato. The UK is just the opposite," he said.

Germany has also been irked by public demands from the UK and the US for Berlin to spend more money on its military, to bolster Nato’s defences at a time when Washington has made Asia its priority. . . .

"For the last five years, the German defence budget has been quite stable. Nearly no reduction, and in the future it will remain stable. This is nearly unique in Europe," he said. "Of the bigger countries, only Poland is in a similar position. I see reductions in Great Britain and France. I am not criticising that. There are good reasons for that. But if we keep the line, and they don’t, I would like to learn the [reasons why] you hear sometimes we should have more commitments than they themselves. I am speaking frankly."