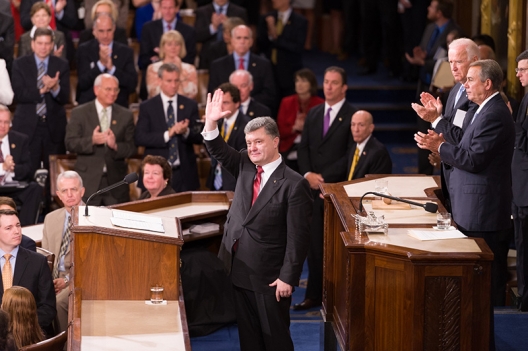 We believe now is the time to add defensive military aid, including weapons, to our support of Ukraine.

This is a cause worth supporting. The Ukrainian people face a heavily armed insurgent force — equipped , trained and supported by Russia — and, more recently, Russia’s own military forces, seeking to establish by force the political and economic dominance Vladimir Putin desires. This aggression undermines peace and stability not just for Ukraine but also in all of Europe, and it sets the wrong precedent for international relations. That is a threat to U.S. interests. As we saw with the tragic downing of a Malaysian jetliner reportedly by ­Russian-supported forces, the impact of Putin’s reckless aggression is global. . . .

We believe the United States should begin providing defensive weapons that would help Ukraine defend its territory. Such weapons could include anti-tank weapons to defend against Russian-provided armored personnel carriers, ammunition, vehicles and secure communications equipment. This would present no threat to Russia unless its forces launch further aggression against Ukraine. In other words, these weapons are lethal but not provocative because they are defensive. . . .

This support would help promote the solution we and the Ukrainians seek: a durable cease-fire leading to a longer-term solution that respects Ukraine’s sovereignty, its future and its freedom to determine its own democratic path, including through parliamentary elections later this month. While there is no purely military solution to what is a political problem, additional U.S. military assistance can help promote a political solution by raising the costs of further aggression by Russia. Raising the costs will give Putin pause to allow political and economic pressure from outside and within Russia to force a political accommodation.

Carl Levin, a Democrat, represents Michigan in the Senate, where he is chairman of the Armed Services Committee. James Inhofe, a Republican, represents Oklahoma in the Senate and is the ranking minority member on the committee.