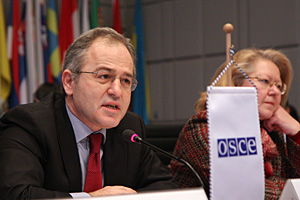 From Ben Birnbaum, the Washington Times:  Turkey’s growing ties to Iran and opposition to NATO missile defenses targeting Tehran are raising "many doubts about Turkey’s future" among officials in the alliance, Greece’s No. 2 defense official says.

"I’m a bit pessimistic about the Turkish future," Greek Deputy Defense Minister Panagiotis A. Beglitis said in an interview with The Washington Times. Mr. Beglitis was in Washington on Thursday for meetings with Joint Chiefs of Staff Chairman Adm. Mike Mullen and other Pentagon officials.

"Also, they objected very, very recently to [the Security Council] of the United Nations concerning sanctions against Iran. They voted against sanctions. That’s the reality. We have to pay attention to that," he said.

Mr. Beglitis said he does not know what the future holds for Turkey’s place within NATO, but he said Greece "share[s] the same concerns with many, many colleagues within the alliance."

"I can tell you I would not be surprised to see a Turkey outside of the Western institutions and playing an autonomous strategic role in the whole region."  (photo: OSCE/Susanna Lööf)