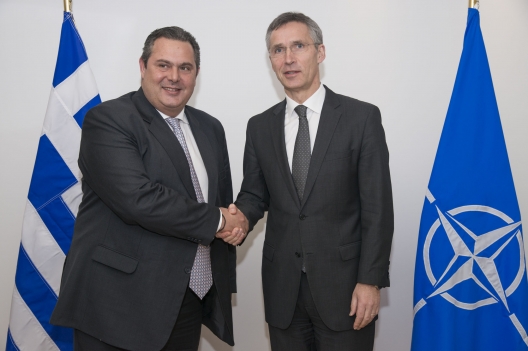 “We spoke a lot about relations between the alliance and Greece; I assured them that relations will continue as before,” Kammenos said in an interview at NATO headquarters in Brussels.

“We will continue our cooperation on a political level and also on a military level…..”

Victory for Prime Minister Alexis Tsipras’s SYRIZA party in January 25 elections rang alarm bells in western capitals because of its close ties with to Moscow.

SYRIZA had previously advocated withdrawing from the 28-nation NATO and Tsipras visited Moscow to meet Russian officials in May 2014, just two months after Russia annexed Crimea….

Asked about such fears, Kammenos replied: “We have seen these reports in recent days all around the world but Greece will continue to be a member of Europe and NATO, that’s for sure.”