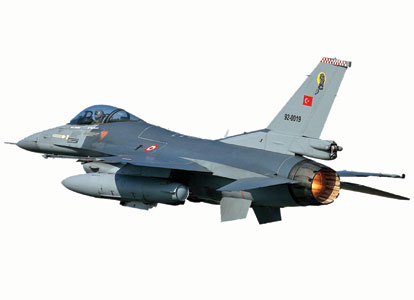 From Selcan Hacaoglu, Reuters:  The Greek prime minister on Friday sharply criticized Turkey during what was meant to be a peace mission between the historical rivals , though his Turkish counterpart, seated in the audience, responded mildly when his turn came to speak.

"What is Turkey trying to prove?" Greek Prime Minister George Papandreou said, complaining about what he said were violations by Turkish jets of Greek air space earlier this week.

Greece and Turkey are NATO allies that have improved ties over the past decade. But they remain at odds over war-divided Cyprus and sea and air boundaries in the Aegean sea. Warplanes from both nations routinely intercept each other. Turkey maintains it is not violating Greek air space and accuses Greece of hindering access to international waters and air space in the Aegean.

"On Wednesday, eight Turkish planes flew over a Greek island," Papandreou said through an interpreter. "This might be routine for Turkey, but such actions lead Greek people to wonder whether Turkey is seeking a different course. …"

"We have to find a solution to problems in the Aegean based on mutual benefits, and we will," responded Erdogan, who is himself known to speak bluntly in diplomatic settings. …