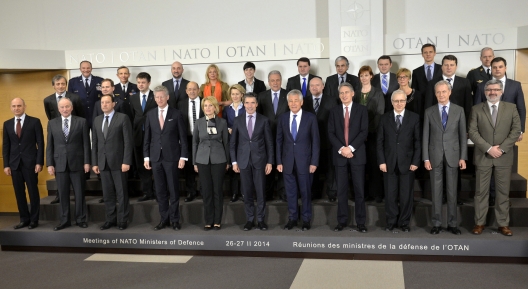 “As European economies recover, leaders must make the case for renewed investment in military capability,” he said. “The current path is not sustainable. Our alliance can endure only as long as we are willing to fight for it,and invest in it.”

He added, “If the alliance is to remain effective, adaptable, and relevant, rebalancing NATO’s burden-sharing and capabilities is mandatory – not elective.”

From Phil Stewart, Reuters:  Hagel cited the need to increase NATO’s air-to-air refueling capacity, after the 2011 Libya conflict demonstrated a shortage of tanker aircraft. He said Libya also exposed NATO shortcomings in other areas, including a lack of precision-guided munitions stocks.

“We saw these gaps once again among allied militaries in preparing potential U.S.-led responses to the Syrian regime’s heinous use of chemical weapons,” he said, referring to the U.S. threat last year to conducted limited military strikes on Syrian targets.

Hagel said if leaders of NATO-member nations believed in the value of the alliance, then they would make the case to their legislators and taxpayers.