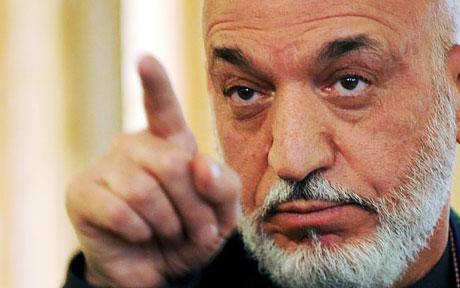 From Ben Farmer, the Telegraph:  Hamid Karzai has accused Russia of breaking international law by sending its own drug agents on a raid against drug laboratories inside Afghanistan which seized large quantities of heroin.

The Afghan president said the joint American and Russian raid on four laboratories in Nangahar province on Thursday was unsanctioned and violated Afghan sovereignty. …

Following the raid, Mr Karzai’s palace released an angry statement claiming: “Such unilateral operations are a clear violation of Afghan sovereignty as well as international law, and any repetition will be met by the required reaction from our side.”

The Russian embassy in Kabul however said the raid, which seized more than 2,000lb of heroin from four separate drug laboratories, had been planned for three months with Afghan assistance.  (photo: AFP/Getty)