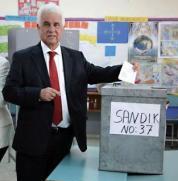 "No-one must think that I will walk away from the negotiating table … The talks process will continue," Eroglu told Turkey’s NTV television.

"I will work with goodwill for a solution that takes my community’s rights into account," he said, adding that he would have ‘close talks with the mother country’ Turkey, which keeps a 35,000-strong garrison in northern Cyprus.