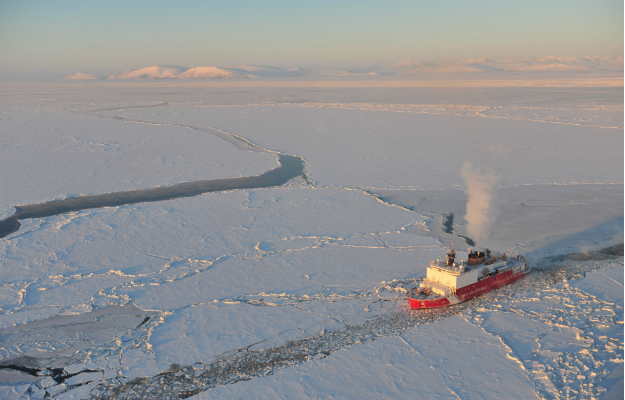 The recent rise in tension in Russia’s relationship with the other Arctic front-line states — all of which happen to be in NATO — doesn’t help. The United States, Canada, Norway, Denmark/Greenland, and Iceland are not seeing eye-to-eye with Russia at the moment on a basket of issues, from the occupation of Georgia, to NATO missile defense systems, to how to handle Syria. That has a tendency to bleed over into dealings in other zones, reducing the propensity to cooperate.

So how can the United States chart a course toward what the Canadians like to call a policy of “High North, Low Tension”?

First, the United States needs to be better prepared to operate up north. We have only two Coast Guard icebreakers, Healy and Polar Star, neither in first-class shape. Other nations are doing a far better job building the ships and associated aircraft and systems to operate in extreme conditions — Russia alone has dozens of icebreakers, and the Chinese have more than we do. We should invest more in such ships so that we can conduct year-round search and rescue, navigational charting, research and development, and environmental response. While these ships are expensive at $860 million, their utility is unquestionable given increasing ice openings. This is laid out in the U.S. Coast Guard’s recently published Arctic strategy. In addition, the U.S. government must encourage interagency teamwork in the High North — increased capabilities will require far more than just the Coast Guard’s limited resources and attention.

Second, we need to double down on international cooperation via the Arctic Council. Currently a small-scale international organization, it must be nurtured and resourced. Ratification of the U.N. Law of the Sea Treaty, a perennial topic in American foreign policy, would also increase U.S. influence in the Arctic. For the United States, working closely with Canada in particular and our NATO partners in the Arctic generally makes good sense and would reduce costs to individual nations. We should use the Arctic Council to ensure that each nation’s military movements, intentions, and patterns of operation are fully understood — thus reducing the prospect of inadvertent tension. There are also important so-called “Track II” projects, like the rapidly growing annual conference sponsored by ArcticCircle.org, a loose confederation of experts in the region who met in Iceland last week.

Third, we need to work as closely as we can with Russia in the Arctic. Although we will inevitably have disagreements over other topics, it is possible the High North could be a zone of cooperation with the Russian Federation. We have shown the ability to work together in Afghanistan, on counternarcotics and counterterrorism, in combating piracy, and in strategic arms control and reductions. We should do what we can — working with NATO allies — to make it so.

Adm. James Stavridis retired from the U.S. Navy after four years as supreme allied commander of NATO. He is now dean of Tufts University’s Fletcher School of Law and Diplomacy.