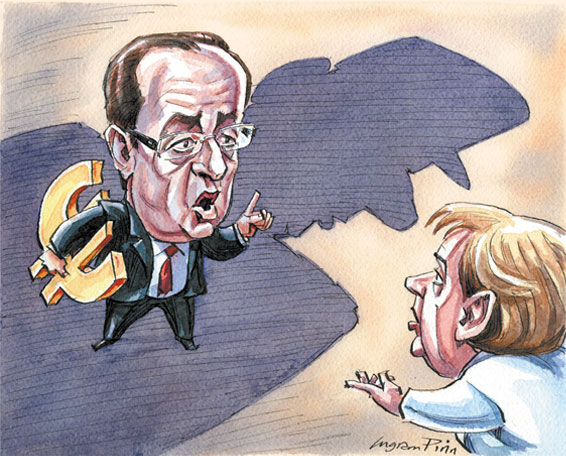 From Phiip Stephens, the Financial Times:  Germany’s answer, in other words, is more Europe. Mr Kohl wanted a political union at the outset of the enterprise. Mitterrand rebuffed him. France’s enthusiasm for building Europe has not diminished its parallel resolve that the big decisions are reserved for national governments. There have been moments of compromise – as when Jacques Delors ran the European Commission – but De Gaulle’s “l’Europe des patries” has remained the leitmotif of French policy. Now Ms Merkel is asking for the treaty changes denied to Mr Kohl.

Thus far Mr Hollande has shown only part of his negotiating hand. The new president wants the eurozone to swap the mantra of austerity for policies to promote growth. France backs calls for more funding for the European Investment Bank and faster disbursement of structural funds. This week, officials said Mr Hollande also wanted a financial stability package that would see the European Stability Mechanism providing direct support to banks and the ECB assume oversight of the eurozone financial sector.

Such proposals echo demands from Italy’s Mario Monti and Spain’s Mariano Rajoy for forceful short-term measures to shore up the credibility of the euro. Rome and Madrid also expect French support for a eurozone redemption fund that would mutualise some of the accumulated debt of vulnerable eurozone states.

The implication so far is that Mr Hollande is ready to play hardball in negotiations with Ms Merkel. . . .

There is only so far the French president can travel along this road. The facts of European power have turned against France. Mr Mitterrand had a big bargaining chip in the shape of support for German unification. There was a time when “more Europe” meant “more France”. Everything that has happened since Maastricht has chipped away at the pretence that the Paris-Berlin axis is one of equals.

Mr Hollande also has problems at home. He has promised economic growth, but is committed to reining back France’s fiscal deficit. The country’s competitiveness problems are not as acute of those of Spain or Italy, but they are serious enough.

To decouple from Germany and put France at the head of Europe’s Club Med would be to tear up half a century of French European policy. My friends in Paris tell me that such a shift would represent a national humiliation. The alternative, however, is to step out of De Gaulle’s shadow and sign up for the leap to integration demanded by Ms Merkel. This looks uncomfortably like an excruciating choice in which heads-Germany-wins and tails-France-loses.  (graphic: Ingram Pinn/Financial Times)