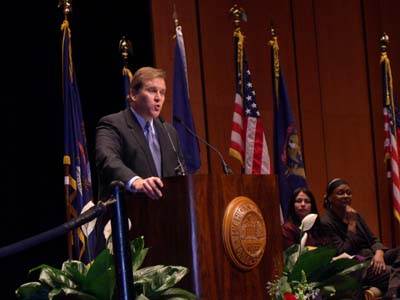 From Josh Rogin, the Cable:  Rep. Mike Rogers (R-MI) said in a late Wednesday interview that the Obama administration’s top national security officials were deeply split on whether arming the rebels was a good idea. In a classified briefing Wednesday with lawmakers, Secretary of State Hillary Clinton, Defense Secretary Robert Gates, Joint Chiefs Chairman Adm. Mike Mullen, and Director of National Intelligence James Clapper, Rogers said it was clear that there were deep divisions between the cabinet officials regarding the wisdom of arming the rebels.

"I’ve never seen an uneasiness amongst their national security cabinet members as I have seen on this. It’s kind of odd," said Rogers. He declined to say which cabinet members were supporting arming the rebels and which were opposed, but he said it was obvious that they disagreed.

"Everything from body language to the way they are addressing members of Congress, it’s very clear that there’s lots of tension inside that Cabinet right now. This to me is why it’s so important for the president to lead on this," said Rogers. "I think [Obama’s] reluctant on this, at best. And there are differences of opinion and you can tell that something just isn’t right there. …"

[Rogers] said that if Obama wanted to arm the rebels, the president would need Rogers’ support, which he doesn’t yet have.

"Any covert action that happens would have to get the sign off of the intelligence chairmen, by statute. You won’t get a sign off from me," Rogers said referring to National Security Act 47. "I still think arming the rebels is a horrible idea. We don’t know who they are, we only know who they are against but we don’t really who they are for. We don’t have a good picture of who’s really in charge. …"

"The number 3 guy in al Qaeda right now is Libyan. They have put a fair number of fighters into Iraq from Libya. So it is a place where al Qaeda is, [but] that doesn’t mean this is an al Qaeda effort."

"The administration missed a big opportunity when they didn’t talk about chemical weapons stockpiles. I’ve seen it personally with these eyeballs. Their biological weapons program, we think we got it all but we’re not sure," said Rogers. I worry a lot about who is safeguarding that material. We believe right now it is in the hands of the regime."

"Mustard gas in the hands of bad guy, you don’t have to have a large scale event to have that be an incredibly dangerous terrorist weapon. And there are other things that he has as well."  (photo: Office of Congressman Mike Rogers)