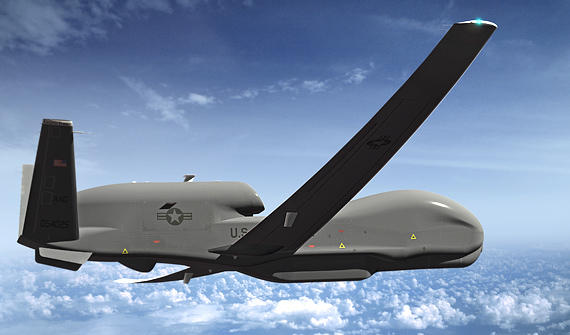 From Zach Rosenberg, Flightglobal:  The House Armed Services Committee has made the first move to reverse the US Air Force’s controversial decision to retire the Northrop Grumman RQ-4 Global Hawk Block 30 fleet.

The committee’s panel on tactical air and land forces passed an amendment that would prevent the USAF from spending taxpayer funds on efforts to retire the RQ-4 Block 30s, an imagery and signals intelligence gathering version of the Global Hawk family.

The panel’s recommendation signals the beginning of a legislative battle with the Obama administration over the fate of the Block 30 fleet. Three more committees in the House and Senate must still pass separate versions of spending bills for the next fiscal year.

The Obama administration submitted a budget request in February that proposes to retire the Block 30 fleet.

From Jeremy Herb, the Hill:  The Tactical Air and Land Forces subcommittee’s portion of the defense authorization bill would “require the Secretary of the Air Force to take all actions necessary” to keep the RQ-4 Global Hawk Block 30 unmanned aircraft operational through the end of 2014, according to documents released Thursday by House Armed Services Chairman Buck McKeon (R-Calif.).

The bill would also “limit the use of funds” for the Pentagon to retire the Block 30s, which it had proposed in its 2013 budget. It says no funds could be used in 2013 to “retire, prepare to retire, or place in storage an RQ–4 Block 30 Global Hawk unmanned aircraft system.”

The Pentagon proposed retiring 18 of Northrop Grumman’s Global Hawk Block 30 drones, one variant of the unmanned aircraft, which the Air Force said would save $2.5 billion over the next five years. . . .

But the plan faced resistance in Congress, including in the House Appropriations Defense subcommittee, where ranking member Norm Dicks (D-Wash.) came to the aircraft’s defense.

“I must tell you, putting the Global Hawk in a hangar is not acceptable to this member,” Dicks said at a March Air Force budget hearing. “I think we’ve got to find somewhere, whether it’s NATO, SOCOM, the Navy, or somewhere, to use these Global Hawks.”

From Avionintel:  I know the USAF says the U-2 does the Block 30 Global Hawk’s job better and more efficiently, but seeing that there is pretty much a consensus for needing more strategic ISR platforms, utilizing the abandoned Block 30 Global Hawks could not hurt.

If the complexity of the Block 30′s assigned missions are too much for the system to handle efficiently, than just stick a Battlefield Airborne Communications Node (BACN) on-board and other beyond line of sight communications systems and let them act as an airborne data-fusion platform and communications relay alone.  . . .

Even the Navy’s Global Hawk Block 40 “Broad-Area Maritime Surveillance” aircraft, otherwise known as BAMS, will have BACN built-in, along with pretty much everything and “the kitchen sink” of ISR capabilities. This is great, but a single BAMS aircraft can be in only one place at one time, why not put it’s little brother to work on less dynamic mission sets such as the humble yet vitally important BACN role alone? It just seems ridiculous to me that we purchase these assets and decide not to use them, even if we do so in a lesser role or at a lower frequency.  (photo: AviationNews.eu)