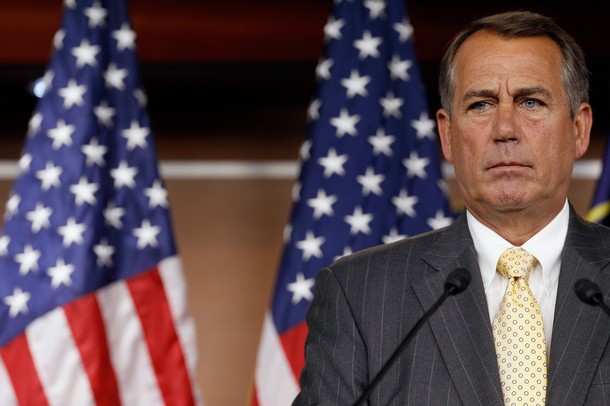 From John Bresnahan and Jake Sherman, POLITICO:  House Speaker John Boehner (R-Ohio) has introduced a resolution on Libya that bars the use of any American ground troops in the North African nation and notes that President Barack Obama did not ask Congress for authorization to engage in a bombing campaign with NATO. . . .

Boehner told the House Republican Conference during a closed-door meeting on Thursday that he doesn’t “want to turn the floor over to Dennis Kucinich,” the liberal Ohio Democrat who has been a driving force against the administration’s military action in Libya.

The Kucinich resolution, which is scheduled to come to the floor Friday, calls for an end to U.S. involvement in the campaign to overthrow Qadhafi within 15 days of enactment.

The resolution Boehner unveiled, although softer than the Kucinich language, still represents a direct confrontation with the president over a major national security issue. . . .

The resolution will come to the floor Friday as a Republican alternative to Kucinich, GOP aides say. Other resolutions by GOP Reps. Michael Turner (R-Ohio) and Tom Rooney (R-Fla.) will not see floor votes, despite widespread support. . . .

“The resolutions by Speaker Boehner and Congressman Kucinich, as currently drafted, do not advance our efforts in the region and send the wrong message to our NATO partners,” she [Nancy Pelosi, D-CA] said in a statement.

Boehner said he knew some Republicans would be frustrated with his resolution, but added that he believed the president “doesn’t want his fingerprints” on the Libya conflict.

Obama has thrown his support behind a resolution drafted by Sens. John McCain (R-Ariz.) and Carl Levin (D-Mich.) authorizing U.S. participation in the Libya campaign, but that measure has not been voted upon yet.  (photo: Getty)