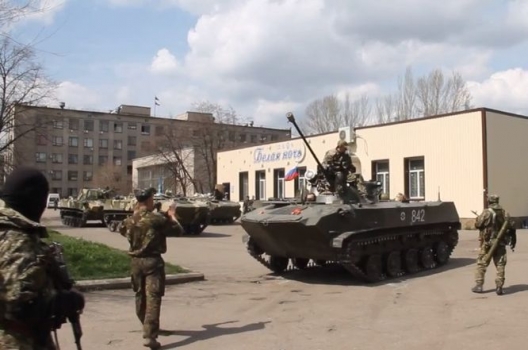 The Kremlin has denied its forces are directly involved in combat, but the latest estimate by US Lt Gen Ben Hodges, commander of the US Army in Europe, says 12,000 Russian troops are operating inside the neighbouring country. …

The evidence of the Kremlin’s direct military involvement can be gleaned from many different types of sources:

For those distrustful of the Pentagon or Western intelligence agencies, you can set their information entirely aside.Indeed, there may be some reasons (such as not wanting the diplomatic damage involved in directly labelling the Russian moves an invasion) why Western leaders may have held back when describing the Kremlin’s action….

This intervention evolved in several phases:

*  initially deniable, in the summer of 2014, with perhaps a few hundred special forces organising locals and Russian volunteers
*  large-scale escalation, during August 2014, when several Russian regular army battalion tactical groups (numbering up to 1,000 each) were sent in to save the separatists from defeat by the Ukrainian military
*  a period of withdrawal and retrenchment, late in 2014, following September’s Minsk ceasefire agreement, in which Russian troop numbers dropped
*  the reintroduction of several formed battalions and numerous specialist troops during renewed fighting, this January and February, allowing the capture of Debaltseve and a good deal of other territory from the Ukrainians…

During the August fighting, entire Russian units were sent across, a necessity perhaps in view of the crisis faced by separatist forces, but one that produced some tell-tale evidence.

Ten paratroopers from the 331st Guards Airborne Regiment, usually based at Kostroma in Russia, for example, were captured together by the Ukrainian military inside their country.

And in Pskov, home of another airborne unit, several corpses were returned together for burial….

Recent Russian reporting makes clear the direct involvement of its combat troops in February’s battle for Debaltseve, something Nato did not even allege at the time.

Indeed much of the Nato or US analysis, however critical German backers of a diplomatic solution may have been of it, may have erred on the side of conservatism….

But reporting from the Russian side of the front suggests that during the fight for Debaltseve, Lt Gen Lentsov won the battle with three battalion groups made up almost entirely of troops originally from units across the border in Russia….

President Barack Obama and his team have long sought to avoid painting themselves into a corner over Ukraine, for example by labelling the Russian action “an invasion”, something that might suggest tougher action was needed against President Vladimir Putin.

But the odd thing is that the most compelling evidence that his army is bearing the brunt of the fighting against the Ukrainian government is now coming from Russian reporters or the mothers of dead soldiers rather than the West.